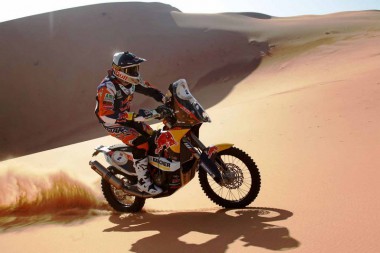 Red Bull KTM’s multi Dakar Rally winner Marc Coma seized the initiative in the first stage of the Abu Dhabi Desert Challenge to lead the field at the end of the opening day. Coma was fastest over the 262.3 km timed special stage, one minute 21 ahead of KTM factory teammate Sam Sunderland. The rally is the first round of the 2015 FIM Cross Country Rallies World Championship.

Other members of the KTM factory team were also well in contention after the first day in the desert with Ruben Faria in fourth and the team’s latest signing, Matthias Walkner of Austria in sixth. Moh Al Balooshi of KTM UAE was a solid seventh, Pablo Quintanilla of Chile eighth, Armand Monleon of Poland ninth and Juan Salvatierra of Bolivia tenth to give KTM eight of the top ten after Day One.

Following a largely ceremonial Super Special on Saturday, riders got down to business on Sunday with their first foray into the Liwa Desert. Coma completed the stage of 404 km of which 262 km was timed special in three hours 12 minutes and 54 seconds to finish with a narrow 1minute 21 margin to Sunderland, the team’s British rider who is based in the UAE and very familiar with the local terrain.

Marc Coma: “Today everything went well. We managed to set a good pace and we won ahead of Sam Sunderland, who we know is fast. I didn’t want to risk anything in the first part but then I was able to attack more, especially in the second part of the special.”

Speaking before the rally Coma said Abu Dhabi is a race where any advantage is good. “It is a rally with little navigation and where every small detail can be decisive. We have to be very attentive and apply the maximum concentration. The conditions in Abu Dhabi are always very hard and the temperatures are very high,” he added.

Sunderland, who has narrowly missed victory the two last years is looking to take the maximum advantage out of riding in the familiar terrain while Austria’s Matthias Walkner, who was impressive in his first Dakar Rally said before the start that he was hoping for a top 10 finish and wanted to keep working on his navigation. The Red Bull KTM Factory riders are competing on the KTM 450 RALLY.

Coma has won this event seven times, the highest number of KTM victories for a single rider. KTM riders have won every year except three since 1995 when motorcycles were first including on the program. Some 108 riders are contesting the motorcycle category this year, which is also the 25th edition of the Desert Challenge. 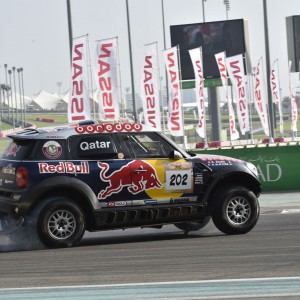