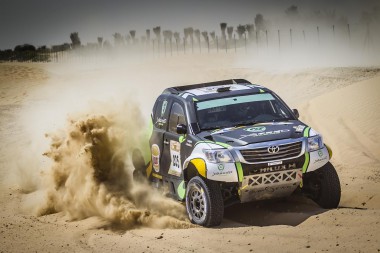 Race officials laid on a punishing route through the Rub Al-Khali and western region of the Al-Garbia desert to celebrate the 25th anniversary of the second round of the 2015 FIA World Cup for Cross-Country Rallies and the Overdrive team gave an impressive performance in high temperatures and difficult conditions. 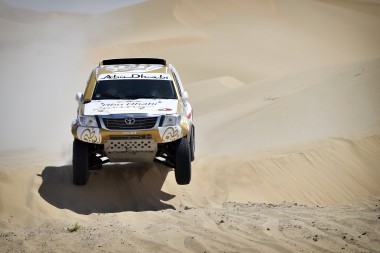 Saudi Arabia’s Yazeed Al-Rajhi and German co-driver Timo Gottschalk recovered from early delays to set an impressive pace and climb back to fifth overall, while the Polish duo of Marek Dabrowski and Jacek Czachor brought the Team Orlen-backed Toyota home in sixth. With the neutralisation of the final stage because of a sandstorm, Qatar’s Nasser Saleh Al-Attiyah snatched victory by the margin of 19min 47sec.

Abu Dhabi Racing’s Sheikh Khalid Al-Qassimi belied his lack of knowledge of cross-country rallying for three and a half days and was on course for a superb top four finish on his debut with the Toyota Hilux, when gearbox issues intervened midway through the penultimate stage after the car landed heavily. Al-Qassimi and Portuguese navigator Jose Marques had put on a superb performance in a demanding physical environment. 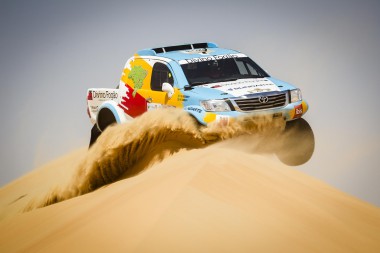 Master relay issues sidelined the Brazilian crew of Reinaldo Varela and Gustavo Gugelmin after the first of the desert stages. They had been running as high as third overall in the fourth Overdrive Toyota Hilux.

“We knew very well during the year that this would be the worst event for us in the championship with the slow dunes and the type of terrain not ideal and giving an advantage to the torque of the turbo diesel engine,” said Overdrive team director Jean-Marc Fortin.

“Our drivers pushed hard though, as we could see from the hard landing at 7500rpm that Sheikh Khalid had on the last but one stage. But now, literally, the storm has passed for us and we can move on to more fruitful events like Qatar and Egypt.

“Saying that, I was very impressed with the way that Sheikh Khalid (Al-Qassimi) adapted to the sport. We knew he was fast from his performances in the WRC, but he was excellent in the dunes and we hope that this small setback will not put him off from returning for other events in the FIA World Cup.”

The meat of the action began with the first of five desert selective sections last Sunday and local driver Yayha Al-Helai was the surprise early leader with a time of 3hr 20min 13.0sec on the 262.36km stage.

Varela finished the section in third and climbed into a similar position in the overall rankings and Al-Qassimi delivered a particularly impressive performance on his first ever cross-country desert stage with the Toyota Hilux and finished fifth, just 25 seconds behind defending Dakar champion Al-Attiyah.

Dabrowski held ninth, but Al-Rajhi dropped just under an hour to the leaders with a broken rear drive shaft and finished the run through the Al-Garbia wilderness in 23rd overall.

The fifth quickest time on the second of the desert selective sections lifted Al-Rajhi up the leader board into 12th position. High temperatures made the sand particularly soft in places and Al-Attiyah managed to hunt down Al-Helai and move into the outright lead by a margin of 4min 13sec.

Al-Qassimi continued to impress in his Abu Dhabi Racing-backed Toyota Hilux and recorded the seventh quickest time to hold a solid fifth in the overall standings. “We lost a few minutes stuck in the sand and then had air conditioning problems,” said Al-Qassimi. “Hot air was blowing on to us. I drank all the water and then started losing concentration because of dehydration.”

Dabrowski was 10th and climbed to eighth overall, but Varela was sidelined with master relay issues.

The third loop stage through the Rub Al-Khali and around the Qasr Al Sarab bivouac ran for 279km. Al-Rajhi, Al-Qassimi and Dabrowski began the day fifth, seventh and 10th on the road and finished the special in ninth, third and sixth positions. Al-Qassimi climbed to fourth in the general classification, Dabrowski was up to sixth and Al-Rajhi finished the day in eighth overall. Al-Attiyah won the stage and extended his lead over Russia’s Vladimir Vasilyev to 15min 54sec.

The Qatari won the penultimate stage and headed into the final day with a lead of 19min 47sec over Vasilyev. Al-Rajhi clocked the third fastest time and climbed to fifth overall and Dabrowski moved up to sixth, despite setting the 13th fastest time through the stage. Al-Qassimi began the day in fourth on the road but, midway through the day’s section, he succumbed to a transmission issue and retired after a heavy landing.

A sandstorm forced race officials to neutralise the final stage on safety grounds and the 42 surviving cars returned to the Yas Marina circuit in Abu Dhabi via a road section. 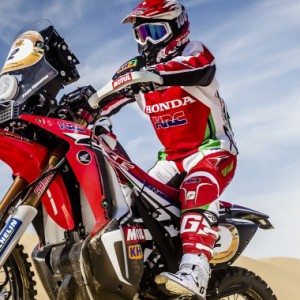