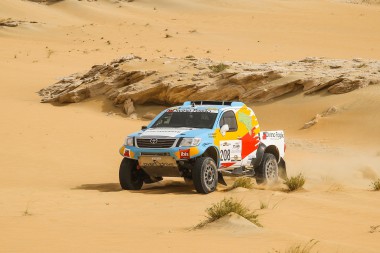 d three of the 2015 FIA World Cup for Cross-Country Rallies.

But the result could have been even better for the Belgian Toyota Hilux team had Saudi Arabian driver Yazeed Al-Rajhi not broken a drive shaft near the finish of the final stage and lost a potential second in the overall standings.

Despite punishing heat and tricky navigation through the remotest extremities of the Qatar desert, Brazilian Reinaldo Varela and Pole Marek Dabrowski emerged unscathed from the one of the toughest events in the off-road calendar and added to their respective points’ tallies with the final position on the podium and fifth overall.

Al-Rajhi won the fourth of the five special stages with German co-driver Timo Gottschalk and looked set to reach the podium behind local driver and eventual winner Nasser Saleh Al-Attiyah until he sustained a broken drive shaft after the last passage control and got stuck in the sand dunes en route to the finish. 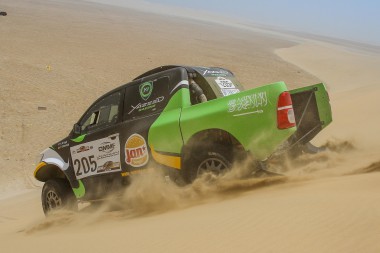 Varela and fellow Brazilian navigator Gustavo Gugelmin overcame a total of nine flat tyres over the five days in the second of the Belgian-built Toyotas and set the fastest time in the last stage to climb into an unofficial fourth in the FIA World Cup points’ standings.

“It was a very tough rally, hard on the cars and difficult with the navigation,” said Gugelmin. “We are happy to be at the finish. It’s disappointing that the team lost Yazeed near the end, but we are happy with this podium finish.”

Dabrowski and fellow Pole Jacek Czachor overcame a minor transmission issue on the fourth day and several punctures to finish a solid fifth in the third Toyota. 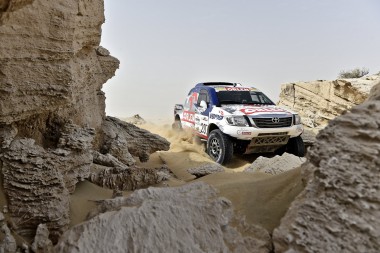 The Overdrive trio had started strongly in difficult conditions, where a strong wind and high temperatures made it even more difficult for the motorcycles running ahead. Al-Rajhi reached the first stage finish 3min 39sec behind Al-Attiyah to record the second fastest time and that was despite having a slow front right-hand puncture and a minor loss of power midway through the stage, which was later traced to a lambda sensor.

Varela’s pace improved as the stage progressed and the Brazilian reached Sealine in sixth place, with Dabrowski slotting into eighth in the Team Orlen car.

The second selective of 398.88km posed a far greater test of the navigational prowess of the co-drivers and covered much of the desert in the south and west of Qatar. Al-Rajhi led outright through the first passage control and then sustained a slow puncture and was forced to stop and change the wheel. A second flat tyre hindered his fight back and the Saudi reached the finish behind Al-Attiyah to remain second overall.

“One slow puncture,” said Al-Rajhi. “We tried to carry on, but every 10km the pressure was going down, down and we had to change. Then, we get another one 180km from the end and have to stop and change. But second place was the target, so I am quite happy.”

Varela was an impressive fourth quickest in the second Overdrive Toyota and moved to within 31 seconds of fifth overall. Despite an early puncture, Dabrowski enjoyed a solid stage performance to set the eighth quickest time and hold a similar position in the overall standings.

Al-Rajhi got stuck in an innocuous place shortly after the start of the third 392.52km selective section and was passed by Varela and another competitor. But he was quickly back on track and re-passed the duo and stayed out of trouble to reach the stage finish in third position to consolidate his second place in the overall standings.

“After about 14km we stop in some easy place, stuck, and we were passed by (Reinaldo) Varela and (Vladimir) Vasilyev,” admitted Al-Rajhi. “Then we pass them again and I was scared then not to make a mistake or get a puncture. But I am quite happy with this position. The points are the important thing for second place.”

Varela was running as high as second overall before flat tyres intervened. The Brazilian finished the special in fourth and climbed to a similar position in the overall standings when two rivals crashed. Dabrowski recorded the sixth quickest time and moved up to sixth overall.

“The stage was very tough, with a lot of stones and rocks after the dunes,” said Varela’s co-driver Gustavo Gugelmin. “All day we had flat tyres. Three punctures altogether and one just five kilometres from the end of the stage.”

Despite two flat tyres, Al-Rajhi recorded the stage win on the longest selective section of the rally. The Saudi duly consolidated a strong second overall heading into the final day.

“I think this was the day of the punctures,” said co-driver Gottschalk. “We had two quite early in the stage and then we were careful. We were scared to lose a third tyre. At the end it was difficult and we had to find a good rhythm, because it was very rough and rocky.”

Varela was fourth quickest and moved into a comfortable fourth overall once Joan Roma retired. A minor transmission issue cost Dabrowski vital minutes over the closing kilometres and the Pole recorded the eighth fastest time and held a solid sixth.

Al-Rajhi looked firmly on course to claim the runner-up spot until the final section of the last 381.89km stage when he suffered a broken drive shaft. His demise promoted stage winner Varela into third overall and Dabrowski also benefited to claim fifth place. 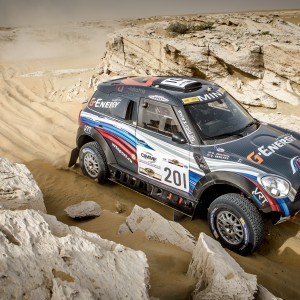 Just a few weeks after the success in the Abu Dhabi Desert Challenge, the MINI ALL4 Racing once again delivered in outstanding...
Copyright 2011-2016 Rallyraid.net - RISE Network. All Right Reserved.
Back to top