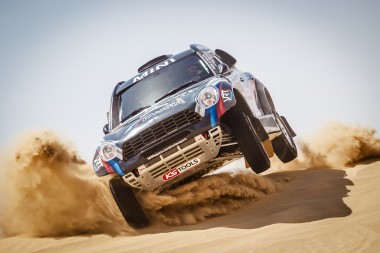 The MINI ALL4 Racing was the car to beat at the Abu Dhabi Desert Challenge 2015. The competitors returned to Abu Dhabi City with four MINI in the lead. But at the car of Nasser Al-Attiyah, the Stewards measured that the suspension-travel was too big. This violation of the regulations was caused due to the strain of the whole suspension during the whole rally. Though the Stewards noticed that the offense was not done on purpose, they disqualified the MINI of the Qatari.

Due to the disqualification all the crews climb up one position. The two Russian Vladimir Vasilyev and Konstantin Zhiltsov now get the FIA World Cup points for the first position overall. The Dutch crew Erik van Loon and Wouter Rosegaar are now second. Young Brit Harry Hunt, who challenged his first cross-country rally with the very experienced navigator Andreas Schulz (GER) in the passenger seat, climbs from an already very good fourth position up to the third place. The Argentinean duo Orlando Terranova and Bernardo Ronnie Graue are now sixth, followed by Adam Malysz and Rafal Marton (both POL), who finished their first race in a MINI ALL4 racing.

Following a prologue at the Yas Marina Circuit, the Abu Dhabi Desert Challenge took the competitors into the desert. In the four following stages, the teams mainly had to cope with dunes and sand – and extremely high temperatures during the third and fourth stages. The fifth and final stage had to be cancelled short before the scheduled start. A sandstorm had started over night and so, the helicopters weren’t allowed to take off. Consequently, the drivers returned – on the road – to Abu Dhabi City. 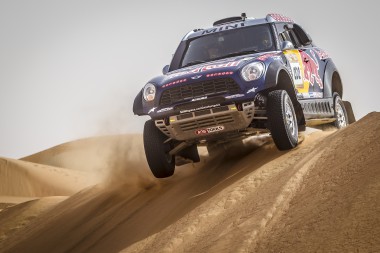 Al-Attiyah encountered a difficult start into the event: in the first stage, he got stuck and lost some 20 minutes. But from that point in time, the man from Qatar was virtually unstoppable and the setback quickly was forgotten. Together with his co-driver Baumel, he won all the other stages to win the rally with a lead of nearly 20 minutes on Vasilyev / Zhiltsov. Unfortunatelly this outstanding performance was not honored. “What a shame, we have to try everything that something like this is impossible to happen in future races,” the Qatari said after his disqualification.

For the Russian Vladimir Vasilyev, enhancing his style of driving represents the top priority, this year. “We learned a lot,” revealed Vasilyev. “In particular from Nasser we could follow across the dunes again and again. This was really important for us.” 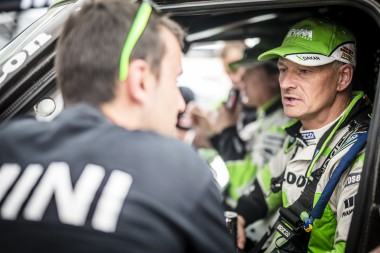 Also van Loon was happy with his achievements in the Abu Dhabi desert Challenge. “It’s a pity that the final stage was cancelled as the rally was big fun,” said the Dutchman. “On the first days, the field had a similar quality as the one of the Dakar rally. The MINI All4 Racing once again ran flawlessly. I’m very sorry what happened to Nasser.”

The surprise in the Abu Dhabi Desert Challenge, however, was Harry Hunt who was quick right from the start. “The past days were incredible and I enjoyed them to the max,” he said. “But they also were tough – the long days and the incredible heat. I never had expected that the MINI ALL4 Racing would prove to be such a good racing car, allowing you to cross extremely high dunes.”

Orlando Terranova also used the desert rally as a kind of practice session for the Dakar as the drivers have to drive a lot in the desert, here. At the same time, his MINI ALL4 Racing also was subjected to a test in competition conditions. “I know that I still have got my deficits in the dunes and here in Abu Dhabi, I could focus on working on this area. I will definitely return from Qatar as a faster driver. Now we have to analyse were I still can and have to make progress.” 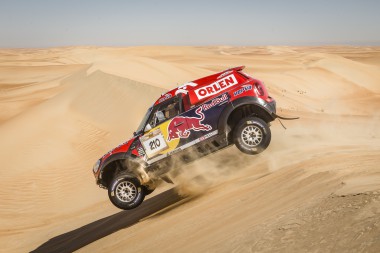 For Adam Malysz, it was the first rally behind the wheel of a MINI ALL4 Racing and the Pole was thrilled. “We made an important step for the future,” he said. “The MINI is nearly perfect. The time we lost was caused by us, not our vehicle. We didn’t always succeed in finding our rhythm and in addition, we were involved in an incident with another competitor yesterday.” Another car had broken down behind a dune and the driver did not warn the following cars and so, Malysz couldn’t avoid hitting it when coming across the dune. Fortunately, nobody was hurt. “But all in all we are really happy. We contested our first event with the MINI and we made it to the finish. Now I’m looking forward to the future,” Malysz added. 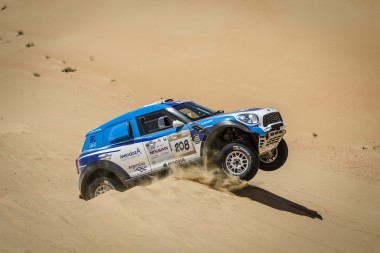 Meanwhile, the 2015 Abu Dhabi Desert Challenge was less successful for the pairings Lucio Alvarez (ARG) / Gabriel Moiset (ESP) and Stephan Scott (GER) / Xavier Panseri (FRA): Alvarez had to retire after stage two as his co-driver suffered bad back pain and Schott’s rally came to a sudden end yesterday: in a multi-time roll-over, his vehicle was damaged that badly that it couldn’t be repaired on site.

“This can happen, but normally it may not. It was not directly our fault, that the suspension-travel was too big. It was caused by the material which changed its shape due to the rough conditions in the rally,” revealed Sven Quandt, CEO of X-raid GmbH. “ For the Future we have to do everything, to ensure that something like this never happens again. Nevertheless, the MINI ALL4 Racing was again the car to beat. Unfortunately, Lucio only had a short possibility to show his real speed. The other two “MINI-newcomers” did a great job, especially Harry, who contested his first ever cross-country-rally here.” 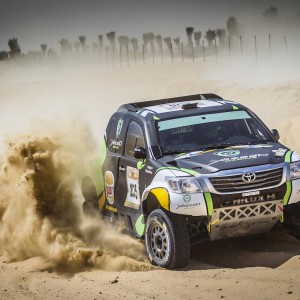 Overdrive Racing finished the gruelling six-day Abu Dhabi Desert Challenge in fifth and sixth positions with two of their...
Copyright 2011-2016 Rallyraid.net - RISE Network. All Right Reserved.
Back to top