The Desafio Ruta 40 (Argentina), the first event in the Dakar Series 2015, finished yesterday at Villa Union after five testing stages over 2,825 kilometres, of which 1,540 km were special stages. Gonçalves, Terranova, Bonetto and Mazzucco came home first in their respective categories.

The general opinion is that the route was tough, with 56 of the 88 entrants making it to the finish after negotiating dry river beds, mountain paths and enormous dunes of soft sand at Fiambala… Navigation skills also played a major role, with experience and concentration making all the difference. 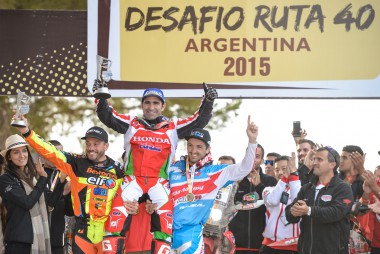 Paulo Gonçalves (Honda CRF 450) was never really under pressure. In front from the first stage, and only slightly trailing his team-mate Joan Barreda, the race seemed to suit the HRB team down to the ground. However, third stage winner Joan Barreda injured his knee and had to withdraw, as did Pablo Quintanilla (KTM 450). Second-placed Javier Pizzolito (Honda CRF 450) was unable to make up the gap with Gonçalves, and third place on the podium went to the Frenchman David Casteu (KTM 450 Rally).

In 4×2 quads, Lucas Bonetto (Honda TRX), who led the overall ranking from stage 2 onwards, won his fourth Desafío Ruta 40 ahead of the Chilean rider Ignacio Casale (Yamaha Raptor), while Nelson Sanabria (Yamaha Raptor) completed the podium in third place. In 4×4 quads, Daniel Mazzucco (Can Am Renegade 800) was out in front all week, winning all the stages with plenty to spare. It is the Argentinian’s fifth consecutive victory in the race. Lucas Zaffi (Can Am Renegade) and Romu Airaldi Prieto (Can Am Renegade) took second and third places. 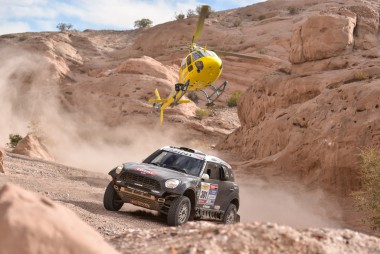 In cars, the Mini All 4Racing of the X-Raid Team occupied the first two steps on the podium. The pairs formed by Orlando Terranova / Bernard Graue and Lucio Alvarez / Sebastian Halpern were the quickest along the route. Orlando Terranova won his second victory in this Dakar Series, 27 minutes ahead of his team-mate Lucio Alvarez. The Czech driver Peter Jerie (Toyota Hilux) finished third.

Dakar Challenge: The Argentinian Martin Duplessis (Kawasaki 450) was the fastest of the 15 bike riders and Leandro Creatora (Yamaha Raptor) stood out in the quads category. 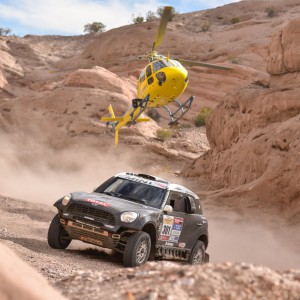 The Desafío Ruta 40 is one of the most difficult rallies of the whole season and pushes every competitor to the limits....
Copyright 2011-2016 Rallyraid.net - RISE Network. All Right Reserved.
Back to top