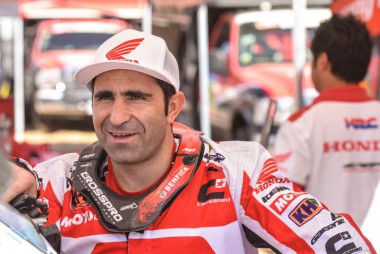 Team HRC’s Portuguese ace Paulo Goncalves has clinched overall victory in the Desafío Ruta 40. Goncalves and the other Honda CRF450 RALLY riders commanded the tough, lengthy and demanding rally throughout, winning four of the five stages.

It was a successful outing for Team HRC at the Desafío Ruta 40, the first of the Dakar Series rallies to be disputed in South America. Paulo Goncalves took up the torch from team-mate Javier Pizzolito – winner both last year and in 2011 – who finished behind Paulo in the runner-up slot. American Ricky Brabec, who had previously performed valiantly on his Team HRC debut in Abu Dhabi, saw his podium chances dashed after some navigational instrument hitches and had to be content with a fourth final place.

Paulo Goncalves had clinched the first stage victory with an excellent Team HRC one-two alongside Joan Barreda and held on to the leadership throughout the rest of the Ruta 40. Javier Pizzolito, under the auspices of Honda and Team HRC, finished the first stage in fourth place and Ricky Brabec fifth. The second day of racing saw the Honda squad take second, third and fourth positions. But the hard work and team-work was to come into fruition at the third stage with a Honda CRF450 RALLY podium lock-out.

The Desafío Ruta 40 proved to be a worthy workbench to test out riders and continue to set up the machines which look likely to feature in the forthcoming Rally Dakar 2016.

In spite of showing ferocious speed and technical finesse, Joan Barreda was forced to pull out after sustaining a knee injury in a heavy fall in the penultimate stage. After checks at the Fiambala hospital, the rider was diagnosed with a dislocated right knee.

Paulo Goncalves: The final result has been a really good one and I’m really pleased with the victory and the work that Team HRC has done. I started with a win and it was important to get an advantage and hang on to the leadership of the race. It was a race with a lot of kilometres, a lot of navigation and riding, but it all worked out really well. Additionally, we were able to test the bike in race conditions very similar to those that we will find in the next edition of the Dakar.
It’s a pity about Joan’s fall, but hopefully he’ll be giving it some throttle again on a bike very soon. Ricky’s performance should be pointed out too, who would have been on the final podium had it not been for the penalisation. 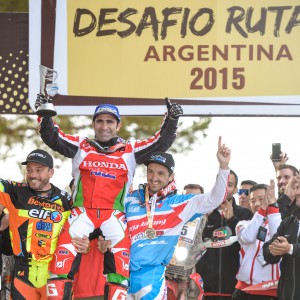 The Desafio Ruta 40 (Argentina), the first event in the Dakar Series 2015, finished yesterday at Villa Union after five testing...
Copyright 2011-2016 Rallyraid.net - RISE Network. All Right Reserved.
Back to top