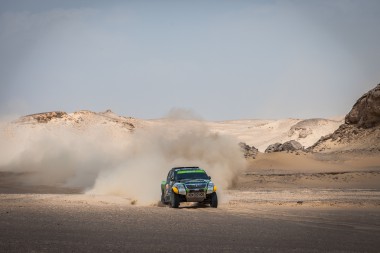 It was still dark when the first bike has left the Caesar Bay Resort of El Alamein direction start of the first selective section of 2015 Pharaons Rally. A transfer of 215 kilometres has taken to the start of special, the first real commitment for the competitors with its 228 kilometres.

Yazeed Al Rajhi (Toyota Overdrive) among the cars, Mohammed Al Balooshi (KTM) among the bikes and Mohamed Abu Issa (Yamaha) among the quads on the opening day of the rally.

Among the four wheels drive the strong Saudi has wished to immediately assert his intention to win again the Pharaons and like last year he has pointed toward the prince of the desert, Nasser Al Attiyah (Mini), preceeding him by two minutes.

Third position for the Polish Adam Malysz (Mini), some six minutes from the winner, while a fourth has concluded to be the actual World Champion, the Russian Vladimir Vasilyev (Mini), at 6’33’’ from Al Rajhi.

Good day also for the Brazilian Reinaldo Varela (Toyota), fifth at the finish in front of his mark companion Marek Dabrowski.

Among the bikes the forecast for the eve has been widely respected and the three pilots mostly accredited for the final victory have occupied the first three positions. The conductor of the Emirates, Mohammed Al Balooshi (KTM) has been the fastest preceding by 1’47’’ the Polish Jakub Piatek (KTM) and by 2’37’’ the winner of the last edition, the Bolivian Juan Carlos Salvatierra.

Among the quads imposed himself the Qatarian Mohamed Abu Issa (Yamaha), with four minutes above the world champion and winner of the last Dakar, the Polish Rafal Sonik (Yamaha).

Tomorrow the second stage will start directly from the bivouac and will head toward East with 343 kilometres of special with the difficult and beautiful cathedral dunes of Sitra. A very difficult challenge, where navigation will ask for particular attention.

Yazeed Al Rajhi: “We started in the eigth position and we catched five cars, we overtook three of them and followed the other two. It was a good stage for us, the only small problem was that after 30 km, my co-driver seat as broken, so it was moving until the end of the stage.”

Nasser Al Attiyah: We took it easy from the beginning because the plan was to catch Vasilyev and we didi t. It was a fast track with some dangerous places like broken dunes. It’s a good option not to start first tomorrow.”

Adam Malysz: “It was a good day for us, the first day with my new co-driver, Xavier Panseri. I never got a navigation in english buti t was interesting. We were fast but not too much.”

Mohammed Al Balooshi: “I’m very happy to have won my firts stage in a World Championship race. It was not easy because at km 110 I had a problem with the oil radiator. I was all covered with oil and also it affected my rear brake. I was leading the race and then I had to low my rithm. But at the end I won anyway.”

Mohammed Abu Issa: “Today was a nice day a quite short stage but with a very rough liaison. The stage was quite fast and was a good introduction to the rally. My speed was very high and as I love high speed I really enjoyed the stage. I got my first test of navigation in Egypt, a CAP based navigation that was a good test for next Dakar.“ 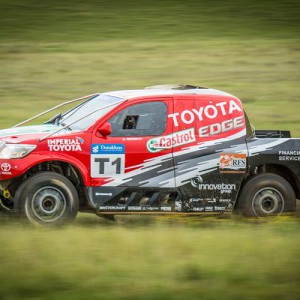 The name "Sugarbelt" is synonymous with South African cross-country racing. And now, after taking a break in 2014, crews...
Copyright 2011-2016 Rallyraid.net - RISE Network. All Right Reserved.
Back to top