Pharaons: Al Rajhi, Toia e Sonik at the top in the third stage 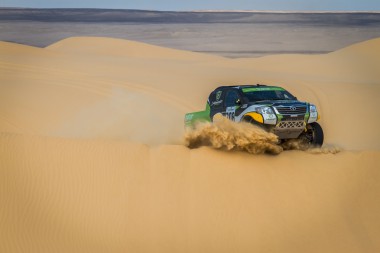 Pyramids are getting increasingly closer, with the third stage of 2015 Pharaons Rally that has passed the turning point with a varied day as usual with many kind of terrains. A wide loop of 346 kilometres, 319 of which of selective section, that has seen the victory of Yazeed Al Rajhi among the cars, Diocleziano Toia among the bikes and Rafal Sonik in the quad category.

Being fifth at the start this morning and exploiting this at his best, Yazeed Al Rajhi (Toyota) has doubled the success of the first stage again in front of Nasser Al Attiyah (Mini), who is definitely registered in second position. The gap between the two is 1’28’’ that becomes 3’38’’ for Erik Van Loon (Mini), finally actor of high level stage. Only fourth is the winner of yesterday, the Russian Vladimir Vasilyev (Mini), anyway only four minutes behind from the winner. Emil Kneisser (Nissan) has been winner of the T2, while the Polaris of Jean-Paul Van Bomen has settled everyone right in T3.

In the general classification Nasser Al Attiyah is still on top, with an advantage fallen to 2’16’’ over Yazeed Al Rajhi, while Vladimir Vasilyev is detached by 5’47’’. 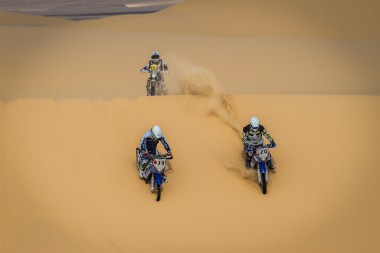 Among the bikes victory would have gone to the Italian Diocleziano Toia (KTM), only 48’’ over the dominant of the Pharaons, the Emirates pilot Mohammed Al Balooshi (KTM). Conditional is a must, as many bike pilots have wasted time searching for a waypoint inserted in their GPS with wrong data. Decisions will be taken by the international jury. Third place has gone to Rafal Sonik (Yamaha), probable winner – obviously among quads, while we find the Polish Jakub Piatek (KTM) at the fourth place preceding Juan Carlos Salvatierra (KTM).

The general classification – also unofficial – sees on top always Al Balooshi with 6’39’’ over Piatek and 9’11’’ over Salvatierra. Sonik is absolute fourth, leading the quad classification with four minutes and half over Mohammed Abu Issa.

Tomorrow the fourth stage of the Pharaons that will get back among the cathedral dunes of Sitra with a stage of 457 kilometres, of which 343 are selective section.

Yazeed Al Rajhi (SAU – Toyota): “We had two “big” moments during the stage, landing on the nose of the car. I had a little bit of sore neck. 100 km before the finish we got a puncture but we were able to win the stage. When we arrived to the finish we realized that we overtook Malysz, but we didn’t see him.”

Nasser Al Attiyah (QAT-MINI): “After 80 km we overtook Vasilyev and we opened the track, but it was not easy, even if I remembered it because it had been last year stage. 10 km before the finish line, while passing some sand hills, we got stuck for two minutes… So three second positions and we are still leading in the overall.”

Erik Van Loon (NLD – Mini) “The first perfect day, finally! We spent two days to set up the car and today everything worked well. The stage was hard not only for the car but for the body too, because of the stones, but we used the soft suspension and it was a good decision. Finally we are back on track!”

Vladimir Vasilyev: (RUS – Mini): “It’s a fact that if you open the track you loose time and this is what happened today. In the three days or us or Nasser were in front, we are fighting against each other every single day and that is very exciting. We have a good starting position tomorrow.”

Rafal Sonik: (POL – Yamaha): “It was a particular day, someway good, someway bad, like a picture of the life. In my quad I use the bib-mousse, to avoid punctures, but with the heat the tyres became too hard and in the rocky sections it my quad was very difficult to drive. Than I played my joker with a two meters high jump, because I was in the dust and I went straight to a turn. Fortunately where I landed it was soft and I didn’t crash, it it was rocky I would have destroyed my quad.”

Mohammed Al Balooshi: (ARE – KTM): “Today I learned a lot from Nasser. With his great experience, when he made a mistake he remained calm and found the good way soon. I did a good stage and I’m happy: when you see that you are right in navigation and you get the result it’s extremely satisfying.”

Kuba Piatek (POL – KTM): “At 40 km I was leading opening the track, after Salvatierra’s mistake. The speed was not so high but I’m happy because here in Egypt I’m improving a lot my navigation skills.”

Pharaons: Changes in the bikes results 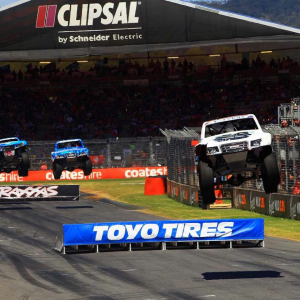 Robby Gordon and Stadium Super Trucks have been invited to the prestigious Goodwood Festival of Speed, the world’s largest...
Copyright 2011-2016 Rallyraid.net - RISE Network. All Right Reserved.
Back to top