The second to the last stage of Pharaons Rally has run over the same track of the second stage, due to the discovery of an archeological site few days before the start of the race. Over a track almost all traced by the passage of the second day, navigation was not playing a dominant role, but in spite of this, surprises were not missing. Mainly among the bikes, with the classification leader Mohammed Al Balooshi (KTM: he has made the same mistake of two days ago, so he’s lost much time before getting back on the right track.

The leg has gone to the Bolivian Chavo Salvatierra (KTM) leaving few attention to the navigation and – even if he opened the track as in the previous days – he has made the difference compared to his competitors.

Salvatierra has preceded by 3’55’’ the Polish Jakub Piatek that has gained – with his second place today – the leadership of the general classification with an advantage of 2’38’’ over Salvatierra. Balooshi is third at 3’04” Fourth place to Diocleziano Toia, in spite of a fall that has injured his shoulder. Compelled to withdraw is Paolo Sabbatucci, taken back at the bivouac by helicopter with a fracture at his left radius.

Among the quads also today Mohammed Abu Issa has managed to be faster than Rafal Sonik, preceding the Polish by almost eight minutes. In general they have now almost twelve minutes gap, that the Qatarian pilots will try to manage tomorrow in the last stage. 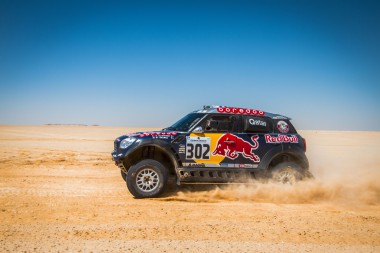 Also among the cars the race has found its feature that seems almost definitive: with the victory of today, the first at 2105 Pharaons Rally, Nasser Al Attiyah has increased his advantage in the general ranking, taking advantage also of a no day of the Saudi Yazeed Al Rajhi. Only fourth today, Yazeed has been overtaken in the classification also by the Russian Vladimir Vasilyev, third at the stage, who is ten minutes behind Al Attiyah. Great stage instead for the Brazilian Reinaldo Varela, second at 1’40’’ from the winner and fourth in the general classification.

Accident for the Mini of Adam Malysz, that has overturned at kilometre 80 after having bumped into a rock. They couldn’t start again due to an engine problem.

The class T2 has been won today by Emil Khneisser (Nissan), while the Peruvian Raul “Mono” Orlandini has excelled in T3.

Tomorrow the last stage of the Pharaons will take the “survivors” in front of the Giza Pyramids, for the deserved and thrilling end of the 2015 edition: a scheduled special of 339 kilometres and the final transfer of 81 to reach the tombs of the Pharaons.

Juan Carlos Salvatierra (BOL – KTM): “Today I have finally done my race, considered that the stage was the same of the day before yesterday. I have pushed hard since the beginning, after thirty kilometers I have overtaken Abu Issa and I’ve driven solo up to the end.”

Mohammed Al Balooshi: (ARE – KTM): “Unbelievable, I have done today the same mistake of two days ago, taking a wrong cap. I’ve taken long to find again the route and I’ve lost the leadership in the classification. Anyway let’s try to finish well the Pharaons Rally, that has been a fantastic experience.”

Stefano Chiussi (ITA – Husqvarna): “I’ve started calm, having 34 minutes of advantage on the second of my class. At kilometer 25 I have had a breakdown to my rear tank and I had to stop to repair it. So Lecis has retaken me and we then drove together up to CP2 with beautiful passages among the cathedral dunes. The last 80 kilometres have risen the rythm and I really had good fun gapping the Latvian by 7 minutes. I’ve pushed my Husqvarna to the limit, a bike in progress.”

Dario de Lorenzo (ITA – Toyota): “Today I had really good fun. To do twice the same stage has given me more confidence among the dunes and it has been a real vision. All has gone in the right way, the car has responded well and it took me one hour less compared to the timing of the second day.”

Nasser Al Attiyah (QAT – Mini) : “The plan was to catch Yazeed and win more than two minutes on him, but at km 25 we had a puncture and we lost less than two minutes. After we pushed to get back the time and we overtook him at CP1. It was a very fast stage because we already knew the track. Today’s time was 16 minutes faster than two days ago. Tomorrow we just try to do our job!”

Reinaldo Varela (BTA – Toyota): “It was much easier from the navigation point of view. We pushed as much as we could. It’s our first time with this car and we know it better and better every kilometer.”

Vladimir Vasilyev (RUS – Mini): “It was a good stage without mistakes. The bumpy road was hard for the body but we had a good fight with Varela. We just let him pass and then we followed him. This race is really special because the battle is quite hard and the differences are small, compared to other rallies. It’s very interesting and exciting.”

Sven Quandt (Mini Team Manager): “ About Malysz accident I can only say that they rolled, but driver and co-driver are ok. They are on their way back to the bivouac.”

Yazeed Al Rajhi (SAU – Toyota): “At the CP1 we pushed like hell but after we couldn’t find a waypoint and it took 1.5 minutes to get it. Then we pushed again but it seems it was not our stage.” 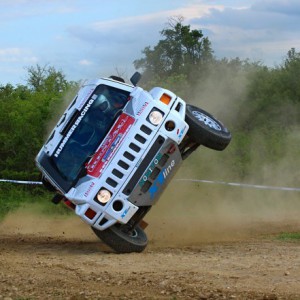 The crew of UltimateDakar, Tomas Ourednicek and Pavel Vaculik starts this weekend at Riverside Baja, fourth round of the Central...
Copyright 2011-2016 Rallyraid.net - RISE Network. All Right Reserved.
Back to top