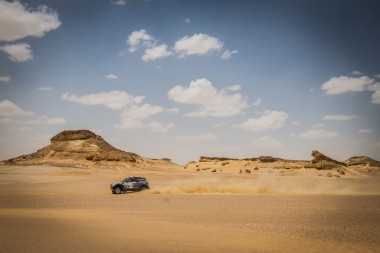 Vladimir Vasilyev among the cars, Mohammed Al Balooshi among the bikes and Mohammed Abu Issa among the quads are the winners of the second stage of the 2015 Pharaons Rally. The first drivers and riders have started at 6.00 am directly from the bivouac for the long stage of the day, 457 kilometres total, of which 343 of selective section. In the day menu the beautiful dunes of Sitra, North of the road that from Baharija takes to the remote Oasis of Siwa.

Among the cars it has been the Russian Vladimir Vasilyev (Mini), that has been able to exploit his fourth position at the start in ending the special with the timing 03:17:42. For 1’22’’ he succeded to preced Nasser Al Attiyah (Mini), also today second although now new leader of the general classification. While in third position we find another Mini with Adam Malysz, behind more than two minutes from the winner. Fourth place for the first of the Toyota, the one of the Brazilian Reinaldo Varela, faster also than yesterday winner, the Saudi Yazeed Al Rajhi, late because stuck in a basin between two dunes. 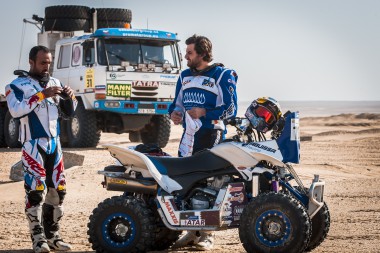 In the T2 cathegory, first place for the qatari sheik Al Thani, on the R-Team Nissan, in front of russian Maxim Kirpilev and of the italian Twins Aldo and Dario De Lorenzo.

Among the two wheels the same arrival order of yesterday, with Mohammed Balooshi (KTM) still winner with the total time 4:27:57. Second position for the polish Jakub Piatek (KTM), behind by 2’35’’ from the Emirates pilot, while the third position has gone to the Bolivian Juan Carlos Salvatierra (KTM), that has left 3’42’’ over the ground.

Diocleziano Toia (KTM), after the technical troubles yesterday (one tyre lost and then the exhaustion pipe) has reached the fourth position ahead of the first quad at the finish, also today the one of Mohammed Abu Issa (Honda). The Qatarian has gained six minutes over his rival Rafal Sonik (Yamaha), while adjusted between the two is Andrea Gaggiani. Excellent result for the Russian Anastasia Nifontova, ninth at the finish preceded by Stefano Chiussi.

Nasser Al Attiyah (QAT – Mini): “It was very hard to navigate today, but everything went well. We catched Yazeed at km 65 and we went together until CP2, but then we decided to push and we left him behind. The result is good because we are first in overall and it’s also good that we don’t have to start first tomorrow.”

Adam Malysz (POL – Mini): “It was a good stage. We made a small mistake after 5 km from the start, we went on a parallel track but we did not loose too much time to find the right way. Vasilyev reached us about at km 180 and then we drove together. We are globally very satisfied with today’s stage.”

Yazeed Al Rajhi (SAU – Toyota): “At the beginning we were pushing at the limit, but not enough, because Nasser reached us. Around km 240 we got stuck in a ditch between two dunes and it was difficult to get out the car. It took more than five minutes. Actual Nasser’s advantage is not so big, so we will keep on pushing.“

Mohammed Al Balooshi (ARE – KTM): “I choose the 6th starting position and it was paying. I reached Salvatierra at km 80. As I said yesterday it’s very important to build up the race: this is just the second day and it’s a long and hard rally.”

Jakub Piatek (POL – KTM): “For me everything is new and at every race I have to learn a lot. I rode with Balooshi and Salvatierra and we arrived together at the finish. I like a lot this desert, very fast tracks, the dunes are nice and you can really enjoy the ride. I did not expect to be so fast, because Salvatierra and Balooshi have much more experience. Here we are at the same level and for me it’s a great experience.”

Juan Carlos Salvatierra (BOL – KTM): “Yesterday I opened the track until the other riders caught me. I finished third and this made my life hard, because I can only choose the fourth position in the starting order of the next day. While the other riders start back and they can reach me. With this regulation it’s very complicated for me to win the race, but I will fight until the end.”

Rafal Sonik (POL – Yamaha): “At the end the stage was ok, but at the beginning I had some problems. After three km the road-book took me on a pist, while the others took another and they caught me. At the CP1 I had some electrical problems and I had some difficulties to turn the engine on. But I kept calm because I knew that the dunes were approaching and I rode very well. After the penalization of Abu Issa I’m leading the race, let’s see which strategy we will do.” 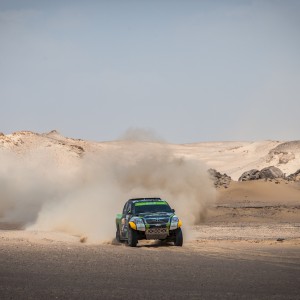 It was still dark when the first bike has left the Caesar Bay Resort of El Alamein direction start of the first selective...
Copyright 2011-2016 Rallyraid.net - RISE Network. All Right Reserved.
Back to top