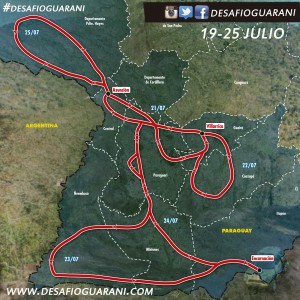 The second edition of the Dakar Series Desafío Guaraní in Paraguay starts today with a prologue at the San Lorenzo circuit. The five-stage event will take 75 crews from Asunción to Villarrica and Encarnación and back.

After the technical and administrative scrutineering on Sunday, the race gets going today with a prologue at the San Lorenzo circuit, a stone’s throw away from Asunción, one of the three host cities of the second Desafío Guaraní together with Villarrica and Encarnación. This leg of the Dakar Series will be officially inaugurated in the presence of the President of the Republic of Paraguay, Horacio Cartes, and the ministers for Tourism (Marcela Bacigalupo) and Sport (Víctor Manuel Pecci, a former tennis player who made it to the final of Roland Garros in 1979).

France’s David Casteu (winner of the 2013 and 2014 Dakar Series) and Argentina’s Javier Pizzolito and Pablo Rodríguez are the favourites to win the motorcycle category, which will feature 75 riders in 3 categories. 34 riders are ready to hit the tracks in the start-studded quad field: Sergio Lafuente, homeboy Nelson Sanabria (winner of the 2014 Dakar Series) and Mauro Almeida should be in the thick of the fight. Pato Silva, Peter Jerie and Martín Maldonado are also worth keeping an eye on as they vie for victory in the 19-strong car category.

Competitors will get down to business on Tuesday, with marathon stages 1 and 2 (Asunción – Villarrica / Villarrica – Asunción). Stage 3 will take them from Asunción to Encarnación on Thursday. On Friday, the course will take them back from Encarnación to Asunción before the closing loop on Saturday. Forests, lush vegetation, sandy strips, humidity and extreme temperatures spice up the menu of this event with a huge variety of landscapes 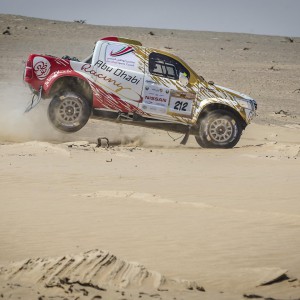 Abu Dhabi’s Sheikh Khalid Al-Qassimi will join forces with Overdrive Racing for the second time this season at this weekend’s...
Copyright 2011-2016 Rallyraid.net - RISE Network. All Right Reserved.
Back to top