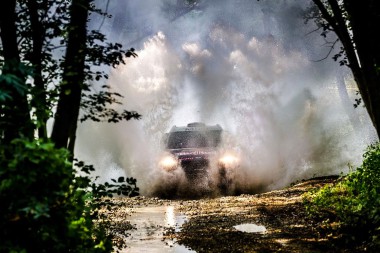 Nasser Al-Attiyah has won third times at HunGarian Baja that had never happened before, so it is a new record in the history of the Hungarian World Cup race. However it is even more important for the Qatari that he has taken the lead in World Cup overall classification with this victory. Seemingly it was a confident victory, but according to him that does not mean the race was easy at all.

‘We considered this victory as very important one, so we tried to give our best from the beginning of the race. We could get advantage on Sunday, so we did not have to take risks on Sunday – we have not done it either. I am glad that we have won and we are leading the World Cup, I enjoyed this not so easy race again. If it depends on me, I will definitely come back next year, because the stages and the organization are also good’ said 2-times Dakar winner Nasser Al-Attiyah. Though for the perfect race his co-driver Matthieu Baumel’s faultless performance was also necessary. 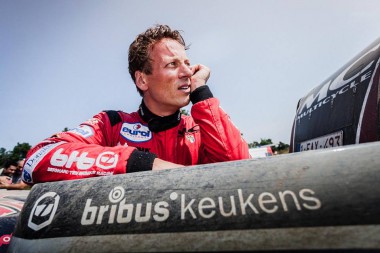 place there was huge fight between Dutch Bernhard Ten Brinke and Czech Miroslav Zapletal. The latter started the day with almost 4-minute advantage, but Ten Brinke did not give up and was simply flying with his Toyota. Instead of avoiding any risk, he stepped on the gas. ‘I pushed the gas as I could. Even if I was 4 minutes behind him, I felt I had some chance. I was provided with a perfect car by Overdrive, so I could win the stage on Sunday and get overall second place. If we think that I have not raced since Dakar I guess this can be considered as good result, so I am very happy’ said Ten Brinke.

Zapletal was neither sad at all, though he decidedly went for retaining his second place, the Dutch driver was simply too fast for him. Furthermore he had some technical problems as well: ‘At 15th km of the stage we realized some electronic problem which stopped after another 30 km. Then we pushed the gas as we could, but we had to settle for third place. After unlucky super special and Saturday’s first stage where we soaked up dust of the car starting in front of us, I think we can be satisfied’ said Zapletal.
So was the best Hungarian, Erik Korda, who beat the leader of Hungarian championship, Károly Fazekas with a big finish – after 517 race km with only 41 seconds. ‘We were standing on the gas as we had agreed on. We had to hurry, because after the first kilometer my drinking-through was slipped off and then also my co-driver’s one, so we arrived at the finish sweltering. It was a very hard race and I did not feel my hand by the end. If there are two more kilometers, I would not surely survive. But there were not and we are here as the best Hungarian’ said Korda.

‘I am disappointed, because we were not fast enough, but honestly I could not even go faster. It was a hard, almost brutal race, the car worked well, but we got very tired’ added Fazekas who could have won the Hungarian championship at this race, but finally it did not succeed. As of the international field Marek Dabrowski who is among leaders in WC overall classification did not start on Sunday, because due to the electronic problems on Saturday he felt he did not have any chance for good result or getting points. He can prove himself again at his home race, Baja Poland in two weeks. 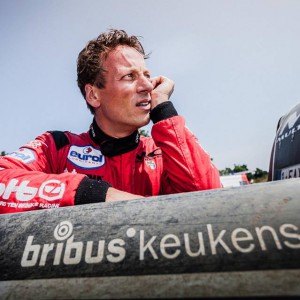