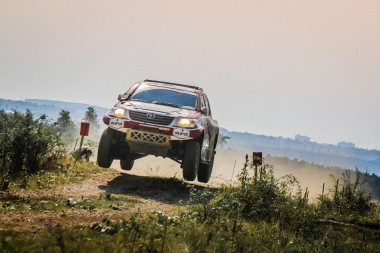 The Toyota Hilux crew shadowed Qatar’s Nasser Saleh Al-Attiyah to the finish to continue their pre-Dakar Rally preparations in superb fashion and give the Belgian team yet another podium finish on a European Baja-type event.

Poland’s Marek Dabrowski and Jacek Czachor crewed the Team Orlen-backed Toyota  and were well positioned until electrical problems cost them their place inside the top five on the second of Saturday’s timed stages.

Dane Jes Munk and former Dakar enduro rider Jean Brucy crewed the third Overdrive Racing Toyota for the first time and gained valuable experience as a new partnership. Munk set some encouraging times and completed the rally in 21st place after incurring time penalties for missing some of the competitive action following an accident on Saturday.

“I have mixed feelings about the weekend, but am delighted that Bernhard (Ten Brinke) was able to fight back from a brake disc problem and regain second place with the fastest time on the last stage,” said Overdrive Racing’s team director Jean-Marc Fortin. “Marek’s (Dabrowski) retirement was disappointing. We will find the problem and make sure that everything is fine for the next race.

“It’s a little frustrating that we were not able to push hard from the start to the end and put the pressure on Nasser (Al-Attiyah). With the tyre regulations, he was struggling a little, but we showed great speed this morning. This was a learning rally for Jes (Munk). He went off on the first stage, but set a good time today and this bodes well for the future.

“Nasser has a nine point lead now in the FIA World Cup because Vladimir (Vasilyev) was forced to miss this race. That is a bit annoying. It would have been nice if he could have taken part here and scored points. But he’s back on the next one and the title race is still wide open.”

Al-Attiyah set the quickest time through the 2.5km super special stage in Veszprém on Friday evening, the Qatari beating Overdrive Racing’s Ten Brinke by just one second on the opening timed test being organised by the Garzone Racing Organisation Promotion Limited.

Dabrowski was 14 seconds behind in 10th and Munk’s debut with his new team got off to a steady start; the Dane posted a time of 3min 42sec and slipped down the rankings to 33rd, before the start of the opening selective section on Saturday morning.

Ten Brinke was first on the road into the opening selective section and the Dutchman carded a time of 2hr 06min 39sec on the split stage and that was sufficient to retain his second position behind Al-Attiyah. Dabrowski was third quickest, but Munk went off the road and was not able to finish the stage.

Ten Brinke was sixth quickest on the second timed stage of the day after damaging a brake disc. Electrical problems accounted for Dabrowski on the second section of the special, after the Pole had recorded the fifth quickest time through the shorter opening part. Ten Brinke reached the overnight halt in third, behind Al-Attiyah and Miroslav Zapletal. After time penalties had been imposed, Munk was classified in 26th.

Al-Attiyah stayed out of trouble on the final stage on Sunday morning and the Qatari secured the overall win and gained the outright lead in the FIA World Cup from the absent Overdrive Racing driver Vladimir Vasilyev.

Ten Brinke attacked hard in a bid to regain second overall and the fastest time on the final stage meant that he overhauled Zapletal to snatch the runner-up spot. Munk time penalties aside, managed to reach the finish of the final stage with the 10th quickest time and  climbed to 21st overall.

Overdrive Racing will be back in action with five Toyota Hiluxes in Baja Poland in two weeks’ time. 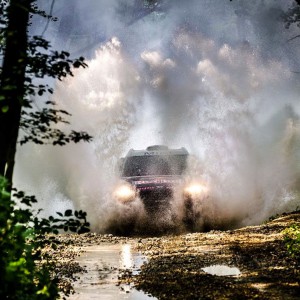 A dominant display from Nasser Al-Attiyah and co-driver Mathieu Baumel at the Hungarian Baja have propelled the pair to the top of the FIA Cross-Country...
Copyright 2011-2016 Rallyraid.net - RISE Network. All Right Reserved.
Back to top