Elisabete Jacinto ready for the Rally of Morocco 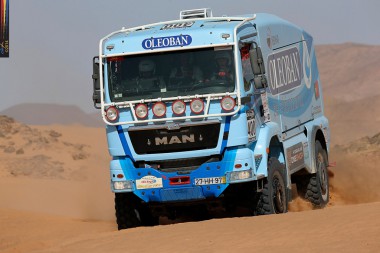 The Portuguese pilot Elisabete Jacinto is completing the last details for her participation at the 16th Rallye Oilibya du Maroc, one of the most important off-road rallies nowadays, which will be held from 3 to 9 October. This competition is considered, by the great teams, the last test before the big off-road marathons, namely the Dakar rally and the Africa Eco Race, which will start in the end of the year and extend into mid-January.

This year the truck category at the Rallye du Maroc Oilibya will be played at the highest level. At this time, it is confirmed the presence of seven teams of this class which include big names such as the Czech Ales Loprais that is going to integrate De Rooy’s team, which is going to participate in this competition with three IVECO trucks. In the other categories there will be pilots representing Mini and Toyota. Among the bikes, the official teams of KTM, Honda and Yamaha will also be at the starting line.

For Elisabete Jacinto the participation in this African competition is particularly important as it will allow her to maintain a good level of competitiveness: “This rally is always a high point in our sports calendar because the degree of competitiveness is always very high. For our part, because of the several changes we made in the truck in the cabin, suspension and steering column, we cannot face it in a competitive perspective; above all it is going to be important to improve all these changes. However, I confess I would like that the work is well done so that we could get a good result” said the Portuguese pilot.

For the OLEOBAN® formation this is one of the most important competitions of its calendar not only for being a successful race – which brings together some of the best pilots in the world – but also because of the difficulty and conditions that are presented to the participants that make this competition a great adventure.

The team OLEOBAN® will leave next September 28th to Morocco in order to complete some tests to the competition truck that recently underwent extensive mechanical changes. 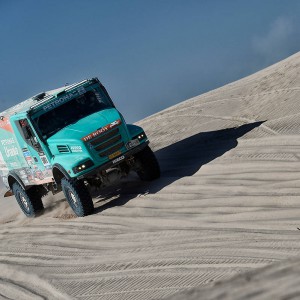 The withdrawal of Peru from the route of the Dakar Rally 2016 was bad news for Team Iveco Petronas De Rooy. The lack of dunes...
Copyright 2011-2016 Rallyraid.net - RISE Network. All Right Reserved.
Back to top