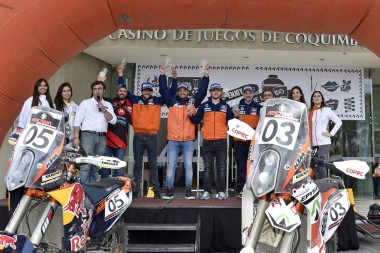 Chilean rider Paulo Quintanilla (KTM) takes the Atacama Rally’s trophy home for the third time in a row. This time, in the race valid for the fifth round of the FIM Cross Country Rally World Championship, the Chilean takes the overall victory with a 2 minutes 49 seconds difference between his closest rival. Ignacio Casale (Yamaha) was the fastest quad and the duo Garces/Latrach are winners in cars.

The race took place in the amazing contrast that only the Atacama Desert can offer to rally raid competitors, in desert areas converted in a colorful scenery full of flowers and beautiful landscapes in Northern Chile. Quintanilla was able to score the best time in the last stage that joined Huasco and La Serena /Coquimbo. Due to the fog, the stage had to be delayed for three hours, to ensure top safety for all competitors that were heading to the finish line located at the Enjoy Hotel in Coquimbo.

Today’s timed section challenged competitors for 103 km, obligating them to bring out their best to fight for the rally’s victory. The stage winner was Portuguese rider Paulo Goncalves, followed by British rider Sam Sunderland (KTM) and the overall winner Pablo Quintanilla (KTM) was third.

“It was not easy to win. Even though is never easy, Matthias (Walkner) made it more complicated for me. The possibility of the final victory only came to my mind when 30 km before the finish, Matthias was lost. There was my chance, and I took it. I am happy, now I have to focus in the Dakar and the possibility of Dakar coming back to Chile,” said Quintanilla.

In quads, the public strategy revealed by Chilean rider Ignacio Casale (Yamaha) was successful, earning the win over Rafal Sonik for over 13 minutes in the overall standings. Uruguayan rider Mauro Almaeida closed his participation with a third place.

“This is my first race and first victory in a world championship event, so I am very happy. Mostly because I felt comfortable in the quad, calm and safe, a very different sensation comparing to the one last year. Another positive point is that I was able to get this victory over an outstanding rival, Rafal Sonik, who is the last Dakar’s winner.”

The victory of the third round for the South American Championship Codasur for cars was obtained by the Chilean driver Hernan Garces and his navigator Juan Pablo Latrach (Ford Ranger), who imposed his reign over Maximiliano Rios/Max Rios and Luis Eguiguren and Matias Vicuña. 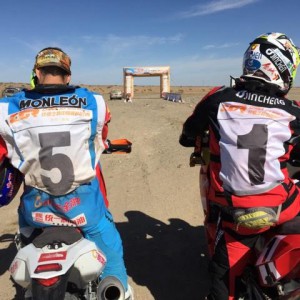 Chinese driver Lui Kun snatched an unlikely victory on the eighth selective section of the China Silk Road Rally between...
Copyright 2011-2016 Rallyraid.net - RISE Network. All Right Reserved.
Back to top