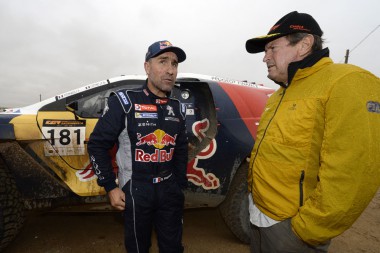 Team Peugeot Total’s Stéphane Peterhansel and Jean-Paul Cottret continued to pull away from their rivals on the sixth desert selective section of the China Silk Road Rally on Friday.

The Peugeot 2008 DKR driver carded a time of 2hr 29min 49sec for the 210.79km of demanding desert stage, which started at the outpost of Menggen Bulage and finished at a desert museum in the outermost reaches of Inner Mongolia.

Peterhansel’s time was 3min 03sec quicker than the stage set by Peugeot colleague Cyril Despres and his navigator David Castera and it meant that the 11-time Dakar champion returned to the bivouac in Alxa Yuoqi with an unofficial overall lead of 19min 08sec.

“We had good fund on the track today,” said Peterhansel. “The sand was hard due to the rain yesterday, so there was no problem in the dunes for the last 30km. The sandy track was beautiful and very nice to drive, fast and bumpy and the rocks are round and not aggressive, so there was no danger of having a puncture.”

Co-driver Cottret also complimented the choice of stage and the nature of the terrain: “The landscape was beautiful. We had a little problem with the GPS at the CP1, but it was okay.”

Despres was a comfortable second on the day’s stage and tightened his grip on second place, although the two Havals, driven by Han Wei and Christian Lavieille, reached the flying finish in a comfortable third and fourth and hold similar positions in the overall standings.

Lui Kun was fifth quickest at the wheel of his Mitsubishi Panda MPR11 and that enabled the Chinese to pass Liu Yan Gui and snatch fifth overall. “No rain today, so no fog in the windscreen and a good clean stage,” said Lui Kun.

Gu Zhiajian completed the final 25km of the stage with a damaged wheel after his Buggy clouted a dune. The Chinese started the day in 45th overall.

Spaniard Armand Monleón Hernandez was back to winning ways in the motorcycle category and the Red Bull KTM 450 Rally rider extended his overall lead over Su Wen Min to 24min 36sec with a comfortable quickest time. His Jincheng rival maintains second overall and fellow Jincheng rider Zhou Tien is third.

“It was a super stage,” said Hernandez. “I rode with Su Wen Min all through and then, after about CP1 (140km), I saw I could open and I made a break to the finish.” 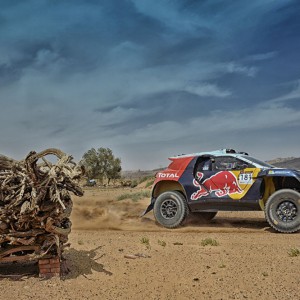 Team Peugeot Total hammered home its advantage on the demanding fifth selective section of the China Silk Road Rally between...
Copyright 2011-2016 Rallyraid.net - RISE Network. All Right Reserved.
Back to top