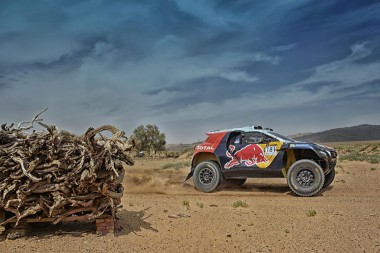 The French duo of Stéphane Peterhansel and Jean-Paul Cottret claimed their third successive stage win in a time of 2hr 49min 42sec in slippery and wet conditions and completed the timed test 5min 23sec in front of their fellow Peugeot 2008 DKR crew of Cyril Despres and David Castera. The result also means that five-time Dakar winner, Despres, was able to pull clear of Han Wei and strengthen his hold on second place in the overall standings.

“It was a very nice track, quite fast, but it was slippery because we had some rain from the start to the finish,” said Peterhansel. “The last 40km were very twisty on a big sandy track. It was fun.”

The special started in the desert village of Wentugaole and finished at Alateng Aobao. The stage finish location achieved notoriety in November 2011 when it entered the Guinness World Records’ list for hosting the largest-ever camel race with 555 entries. This has since been beaten by a larger race, held in northwest China. 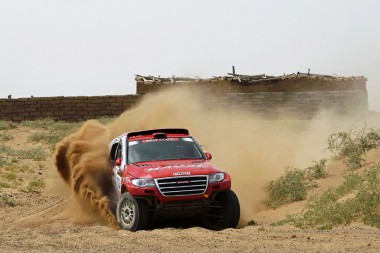 Haval’s Han Wei dropped around six minutes to Despres and retains third position, while French team-mate Christian Lavieille recorded the fourth quickest time and retains a similar place in the overall standings. “It was very fast at the beginning and the car was skidding quite a lot, because we didn’t have the right set-up in the slippery conditions and the rain,” admitted Lavieille.

Wei Hong Jei performed well to set the fifth fastest time in his Buggy, although the Chinese admitted that his open cockpit was not ideal in the wet conditions. Liu Kun was sixth on the stage, although the Mitsubishi Panda MPR11 driver complained that he had to stop on two occasions because of poor visibility. “There was a fog inside the car on the windscreen. It rained from start-to-finish and we had poor ventilation inside the cockpit,” said the Chinese. 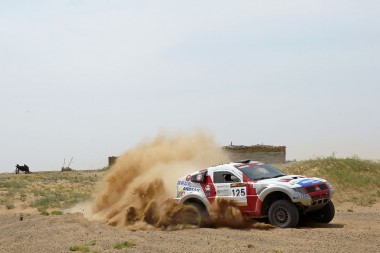 China’s Su Wen Min claimed Jincheng’s first stage win of the event in the motorcycle category on his 450Y Rally and the Chinese duly strengthened his grip on second place behind Spain’s Armand Monleón Hernandez. He rode with the Spaniard for much of the day and then passed the Red Bull KTM when Armand stopped 15km from the finish.

“I had a 15-minute lead, so I prefer to let them follow me rather than open the road and make the track,” confessed Hernandez. “I had a problem with my GPS. The water came inside. It stopped and that enabled Su Wen Min to pass me near the finish.”

Zhao Hong Yi finished the stage in third position on a KTM, but Jincheng’s Zhou Tien maintains third in the unofficial overall standings.

Amongst the international crews in the car category, Adrian Di Lallo’s Isuzu MU-X was 20th, Teruhito Sugawara finished the stage with his Hino truck in 24th and French co-driver Sebastien Delaunay and his Chinese driver Zhang Guoyu were 30th in an ATV Polaris 900.

Di Lallo said: “Today was super. The stage was very long and challenging with a lot of mud and heavy sand, with rolling dunes and flat out salt flats, similar to some stages in the north-west of Australia and parts of Argentina.”

Tomorrow (Friday), the event remains at the bivouac in Alxa Youqi, while competitors tackle a loop stage through Inner Mongolia.

A run out of 221.35km to the start in Menggen Bulage will be followed by a selective section of 201.79km and a 76.55km link guides teams back to the overnight halt. 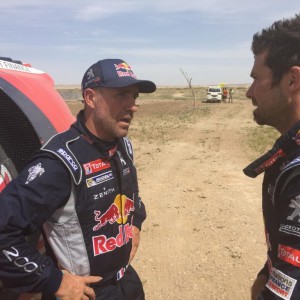 The French duo of Stéphane Peterhansel and Jean Paul Cottret extended their overall lead to nearly nine minutes, as competitors...
Copyright 2011-2016 Rallyraid.net - RISE Network. All Right Reserved.
Back to top