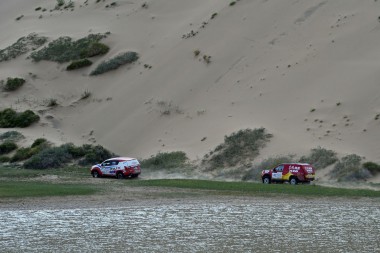 Jincheng rider Su Wen Min capitalised on a navigational error by Spaniard Armand Monleòn Hernandez to secure the fastest time in the motorcycle category on the seventh selective section of the China Silk Road Rally around Alxa Youqi in Inner Mongolia on Saturday.

The day’s stage started in Laohuanjia and it looked set to be business as usual for Monleòn at the helm of his Red Bull KTM 450 Rally, until he made a mistake at a sand dune, tried to cut and lost his way. The Spaniard had to retrace his tracks, lost vital time and that enabled Su Wen Min to cruise through to a second stage win by the margin of 8min 43sec.

However, Monleòn retains a comfortable lead of 18min 43sec in the overall standings with six stages remaining. Zhao Hong Yei climbed to third overall on his KTM 450 Rally after the third fastest time was sufficient for him to overhaul Zhou Tien (Jincheng) in the general classification. 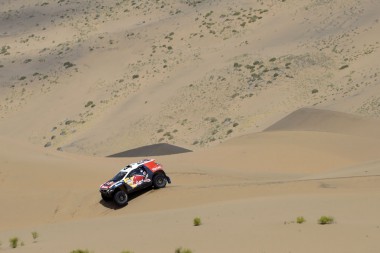 It was business as usual at the front of the car race, with Team Peugeot Total’s Stéphane Peterhansel and Jean-Paul Cotttet extending their lead over Cyril Despres and David Castera to 22min 03sec with another fastest time. Despres clocked the second quickest time and his hold on second place was strengthened still further when Haval rival Han Wei sustained a flat tyre after 105km and dropped several minutes.

Frenchman Christian Lavieille retains fourth place in the second Haval, after carding the third quickest time of the day. Lui Kun was fourth fastest, even though he also sustained a puncture after 125km of the special. Liu Yangui dropped over two hours on the stage and lost his place inside the top six; he now lies ninth overall. Gong Liangliang of the Chongqing Skyman Rally Team moved up to sixth overall in his Mitsubishi MPR13. 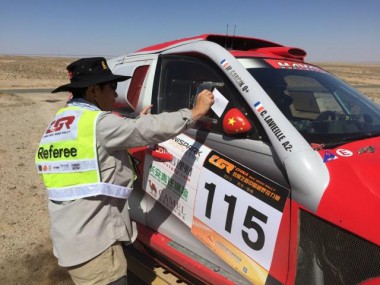 The Australian duo of Adrian Di Lallo and Harry Suzuki began the day in 41st overall in their Isuzu MU-X and that was two places behind Teruhito Sugawara in his Hino truck. “Today was our favourite stage of the rally,” admitted Di Lallo, who climbed to 38th place.

“It was definitely not one for the ill-prepared or the faint-hearted. It was a real mixed bag that could have been in Argentina – fast flowing roads and long runs up dry river beds, dune crossings and even fesh-fesh. We’ve earned ourselves an ice cream for no mistakes in either side of the cockpit!”

Jan Mooij was forced to miss stages five, six and seven when his McRae Evolution developed engine issues. The Moditech team driver launched a frantic search for a head gasket and other engine components as the time penalties for missing stages began to amass for the Dutchman. He has already incurred 300 hours in penalties.

Tomorrow (Sunday), competitors head out of Alxa Youqi and take a 29.56km liaison section to the start of the eighth stage at Shazaohaizi. The day’s special winds its way through remote terrain in the Badain Jaran Desert for 167.35km and finishes at the town of Tiekuang, before a longer liaison of 178.83km takes crews to the overnight bivouac in Zhangye.

Zhangye is a prefecture-level city in the northwest of the Gansu province and is situated on the southern border of Inner Mongolia. The city has also hosted a regular round of the Chinese Rally Championship (CRC) since 2011 and has a purpose-built stadium, which can be used for super special stages with cars competing in pairs. 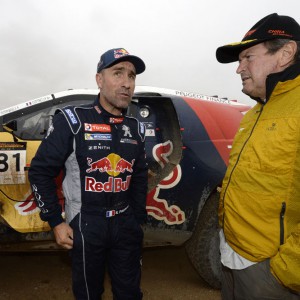 Team Peugeot Total’s Stéphane Peterhansel and Jean-Paul Cottret continued to pull away from their rivals on the sixth...
Copyright 2011-2016 Rallyraid.net - RISE Network. All Right Reserved.
Back to top