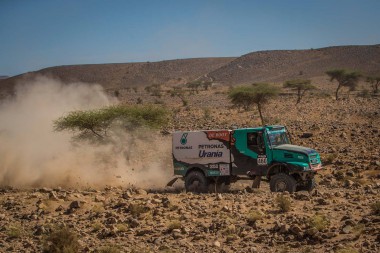 Gerard de Rooy had to take the second day of the OiLibya Rally with care. In the dunes he couldn’t deflate the tyres enough and later on in the 362 kms long stage he had to brake so hard the tyre ran off the rim. “All in all I lost only 12 minutes today to Ales Loprais. I can’t drive as fast as I want to, but it’s okay like this.”

The second stage was completely different than the first one, with quite some dunes and oueds to cross. “We started off well,” Gerard de Rooy tells at the finish. “We could keep a good pace, but in the dunes we couldn’t deflate the tyres like we used to, because of the rims we are testing. So I the pressure was a bit too high to cross the dunes with ease and I had to be careful, especially in turning.”

After the dunes section De Rooy was able to put the pedal to the metal again, but as a consequence he drove in another car’s dust. “In the dust I was just a fraction too late to notice a big sand dune and I had to brake hard. In doing so the tyre ran off the rim and we had to change it again. It took us 9 minutes. We lost some more time in the final section after my seatbelt broke and we had to fix it.”

De Rooy wasn’t bothered that much with the time loss. “We were supposed to have other rims, but they came in too late. We know the cause of the time loss and as long as it aren’t big problems or technical failures, I don’t really mind. It’s part of testing. We push a bit harder than normally in testing, but I can’t push too hard because after this rally we only have six weeks left to rebuild the truck and get it ready for the Dakar, so I don’t want to run into trouble.”

Like De Rooy Ton van Genugten enjoyed the stage. “After the start I had to stop and wait for the boss for ten minutes. After Gerard had passed we tried to follow him as closely as possible. The stage was a nice mixture of tracks, oueds and dunes and again I was surprised by the power of the Iveco. To cross the dunes you have to step on the gas to get to the top and not get stuck, but with this truck that’s as easy as winking.”

The third stage, the M’hamid loop, is a 274 kms long special with sandy but also stony tracks, some dunes, and the crossing of the salt lake Iriki. 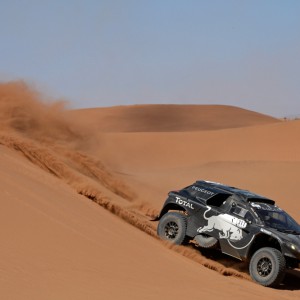 The new PEUGEOT 2008 DKR16 claimed its maiden stage win today in the hands of Carlos Sainz and Lucas Cruz. The ongoing development...
Copyright 2011-2016 Rallyraid.net - RISE Network. All Right Reserved.
Back to top