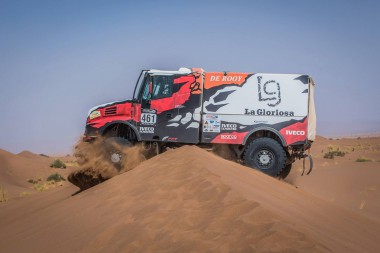 Two punctures caused by jagged rocks and sharp stones cost Gerard de Rooy 20 minutes in total in the third stage of the OiLibya Rally. On top of that De Rooy had to take it easy in the final part of the 274 kms selective stage, to prevent more punctures.
At the end of the day De Rooy came 12 minutes short of winning the stage, that was won once again by his team mate Ales Loprais. The Czech had also suffered problems with the tyres, as well as Argentinian Federico Villagra, who came in fourth, behind De Rooy.
Until the dunes section at approximately 110 kms into the special De Rooy was leading the race. “The first half was perfect,” according to De Rooy. “In the dunes we had to drive carefully again, as we have no beadlock to prevent the tyre to run off the rim when driving with low pressure. But that was pretty much okay.”
The tracks covered with edgy stones, after the dunes, were far worse. The stones shredded two rear tyres. “The first one took 9 minutes, the second one 11 minutes as we couldn’t get the shattered tyre in the back of the truck properly. It was trashed completely.” 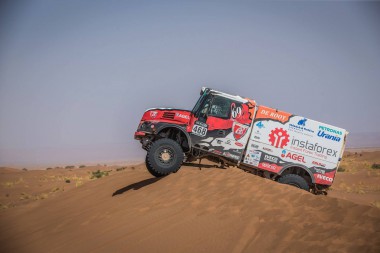 In the final 120 kms of the stage De Rooy had to take it easy and extremely carefully. “I only drove 80 to 90 kms/h to prevent more punctures. The air temperature is over 40 degrees Celsius and when the tyres reach 110 degrees, the rubber wears off. The problem is with the rear tyres, which are the old model. The front tyres are the new ones we are testing. Those seem to be keeping up well.”
Ton van Genugten didn’t need to stop with his team mates to assist. He too suffered problems with the tyres. “With 100 kms to go we found out that the knobs from the tread of all four tyres had gone. Changing tyres would not mean much, as new tyres can blow as well and then we would not have any spare ones left. So we decided to drive to the finish carefully to prevent a blowout. We made it, but without any satisfaction. It was just a shame that a stage that started so well, which beautiful dunes, has a section with heaps of those jagged stones at two third, that ruin the day for everybody.” 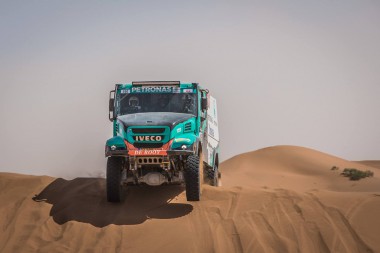 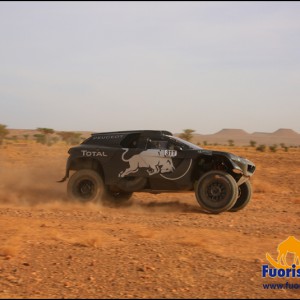 It's almost a historical day. Coming back to rally raid earlier this year, Peugeot needed time to get their bearings, as team...
Copyright 2011-2016 Rallyraid.net - RISE Network. All Right Reserved.
Back to top