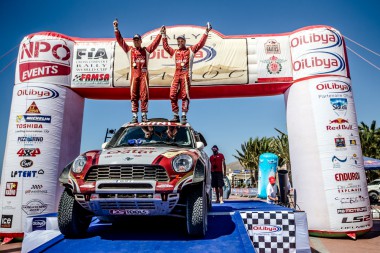 At the end of five days of desert-rally action, Nasser Al-Attiyah (QAT) and Mathieu Baumel (FRA) secured the win in the OiLibya Rallye du Maroc. Al-Attiyah’s toughest rival in the battle for the FIA Cross Country Rally World Cup title, Vladimir Vasilyev, finished runner-up. Nonetheless, Al-Attiyah gained an uncatchable championship lead by winning the penultimate round of the season. With nine of ten rounds contested, the driver from Qatar has got 261 points on his tally, Vasilyev follows 40 points behind with 221. And in the Baja Portalegre, the final round of the FIA World Cup, the winner will be awarded just 30 points. „I’m very happy about my victory here in Morocco and the points I gained in the FIA world cup”, Al-Attiyah beamed. “It was my first priority to increase the gap in the FIA standings to more than 30 points. Now we are ready for the Dakar Rally!”

Mikko Hirvonen made a successful desert debut, in the MINI ALL4 Racing. Having already finished third in the Baja Aragon, the Finn and his experienced French co-driver Michel Périn now secured the fifth place in Morocco. They completed the five stages without encountering any major problems and on day three, Hirvonen even caused a stir by finishing third behind Carlos Sainz and Al-Attiyah. In the end, his gap to fourth place amounted to two minutes and to third place to four minutes. “I’m really happy”, said Hirvonen in the finish. “We didn´t have so much problems and I didn´t get stuck. It worked very well with Michel. I know there are still some areas I’m not so comfortable, but that comes with more kilometres. I should not expect too good results at the Dakar but if I can finish like this – don´t get stuck, not make any mistake – we can deliver a good performance over there.”

The British-German pairing Harry Hunt / Andreas Schulz finished two positions behind the Finn, in seventh. Apart from day one, Hunt made it to the top 10 in every special stage. Adam Malysz and Xavier Panseri followed right behind him in eighth. On the first two days, several circumstances cost the pairing valuable time but afterwards, they displayed a lot of fighting spirit and worked their way back up to the top 10 in the overall rankings.

Although having finished 15th doesn’t seem to be particularly impressive, Erik van Loon and Wouter Rosegaar (both NDL) delivered in great style. On day two, they even succeeded in finishing third. In the third special stage, however, the two Dutchmen got stuck and lost two hours. Without this incident, securing a top-seven result would have been possible for them. “I am ready for the Dakar Rally. We have shown what we’ve got. I am very proud about our excellent result on the second day, reaching the fourth position, and our fastest split time on the final day. The bad luck of the day after was a pity, but Wouter and I learned a lot again and we cannot wait until the start in Buenos Aires on the 2nd of January 2016.”

Jakub ‘Kuba’ Przygonski (POL), who contested his first desert rally at the wheel of the MINI ALL4 Racing, and Andrei Rudnitski (BLR) also had bad luck as their drive shaft broke in the third special stage. But the pairing didn’t give up, repaired the car and finished the special stage with a three-hour deficit. They also worked their way back up, in the following days, and finished 18th in the end. “I’m really happy after my first start in Rally Morocco”, said Przygonski. “That was a huge challenge for me, to rally in a car on a track, that I knew from the motorcycle. It’s completely different! I’m really glad about my speed during my first start, and I know that I can fight to be in top 10 on every stage.”

Nazareno Lopez (ARG) and Sergio Lafuente (URU) made their MINI ALL4 Racing debut. Unfortunately, they got lost on day two, lost a lot of time and had to settle for finishing 38th. In the following special stages, however, they passed numerous other competitors, thus working their way up in impressive style to finish 20th.

„It was a good rally for us, but the Peugeots were very fast and they have a clear advantage due to the regulations. If they manage to improve the reliability of their car, they are faster than us. The Toyotas are on the same level like us,” team manager Sven Quandt said. “Nasser did a very good job and secured his championship points in safe way. Also Mikko performed quite well in his first desert rally. He drives very carefully and tries to not damage the car.” 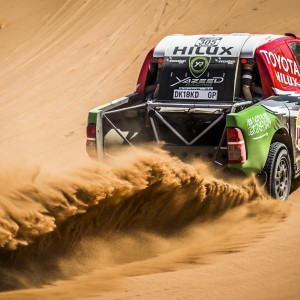 Overdrive Racing and Hallspeed enjoyed a superb OiLibya Rally of Morocco, with four of the team’s Toyota Hiluxes finishing...
Copyright 2011-2016 Rallyraid.net - RISE Network. All Right Reserved.
Back to top