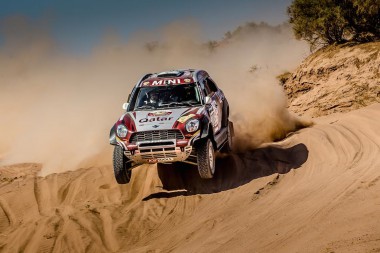 The remarkable run of results for Nasser Al-Attiyah and co-driver Mathieu Baumel continued this week at the Oilibya Rally of Morocco as they once again parked their flying Mini on the top step of the podium. This latest victory sees the Qatar Rally Team pair crowned this year’s FIA Cross-Country Rally World Cup champions with one event of the series to spare.

Nasser and Mathieu exhibited a level of consistency in Northern Africa that could not be matched by any of their rivals. The fact that they did not win a single stage in Morocco demonstrates how perfectly they pitched their tactics as they planned an assault on the big prize waiting at the finish line.

With over 1,000km of timed racing to contest in some of the harshest driving conditions the planet has to offer the Qatar Rally Team duo stuck to their task with skill and dedication. They finished each of the first four stages within the top three quickest cars on the day to stay in the rearview mirror of the race leader.

The time came on stage four for Nasser and Mathieu make their move to the top of the general classification. As competitors fell by the wayside they picked up their third consecutive second place finish on the stage to end the day with a cushion of more than 15 minutes at the summit of the leaderboard. It was a further demonstration of the experienced Cross-Country driving that won them the Dakar earlier this year and a string of events between then and now.

The final loop of Agadir that marked the last stage of the Oilibya Rally of Morocco saw Nasser and Mathieu control the pace as they once again put trust in their own abilities and that of the Mini with which they have shared this season’s successes.

Nasser and Mathieu will now look to the lessons learnt during their 2015 Dakar Rally and FIA Cross-Country Rally World Cup titles as they plan another trip over to South America for the toughest race on earth. 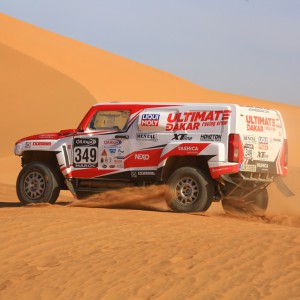 Before the last day of Marocco Rally, penultimate round of FIA World Cup for Cross-Country Rallies, the crew of Ultimate...
Copyright 2011-2016 Rallyraid.net - RISE Network. All Right Reserved.
Back to top