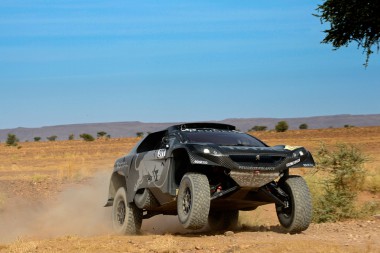 The event’s first competitive section featured a broad variety of conditions, ranging from fast sections to dry riverbeds and stony, twistier portions, and even trials-like terrain in places.
The PEUGEOT 2008 DKR16 gave an immediate glimpse of its potential, since Carlos Sainz – running 12th on the road – was second fastest up to Passage Controls 1 and 2. The Spaniard even led at PC3! However, a puncture with 15km remaining forced him to stop to change a wheel and the time lost cost the PEUGEOT 2008 DKR16 its first stage victory. Despite the delay, Sainz/Cruz are fourth overall this evening (+2m3s). 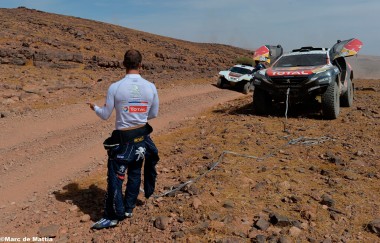 Meanwhile, Loeb/Elena faced a steep learning curve in their 2015-spec PEUGEOT 2008 DKR. The nine-time world rally champions had to cope with a long list of changes to the road book which were published on Sunday evening and then faced running in the dust of the cars ahead of them. They concluded their crash-course introduction to cross-country rallying by hitching a tow behind a truck. Before being slowed by a turbo problem at Km304, however, they had time to showcase their ability to adapt by running inside the top five.

Carlos Sainz, PEUGEOT 2008 DKR16 #311 (4th, +2m3s)
“Because of our running order, we lost a fair amount of time overtaking certain competitors in the dust. Apart from that, everything went smoothly for us, and the car works really well! Unfortunately, our puncture cost us almost three minutes.”

Sébastien Loeb, PEUGEOT 2008 DKR15+ #312
“It’s been quite a complex day. Just before the start, a number of modifications were made to the road book which gave Daniel a lot of work. Then we found ourselves in Hirvonen’s dust. We worked well as a crew, though, and we found a good pace but we ended up being stopped by a turbo problem. The driver of a truck asked if we wanted him to tow us and we reached the end at a pretty brisk pace…”

Bruno Famin, Director, Peugeot Sport
“It was a day of mixed fortunes for Team Peugeot Total today. The first lesson we learned, though, is that the PEUGEOT 2008 DKR16 is competitive. There were one or two minor teething problems but that’s why we are here: to detect them and correct them. For cross-country rally rookies, Sébastien Loeb and Daniel Elena went very well. Despite the problem they had today, we hope to see them back in action tomorrow.” 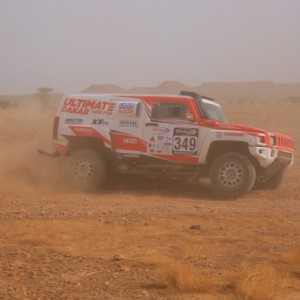 Oh, the nicest part of cross-country rallies… Trying to go fast while not damaging the car in the dust of fellow competitors...
Copyright 2011-2016 Rallyraid.net - RISE Network. All Right Reserved.
Back to top