Joan Barreda (Honda), who quite surprisingly, given the injury he comes back from, won yesterday’s stage and so had the task of opening the road today. He did well in the first third of the stage but a few kilometers of dunes were enough to reverse the situation and put the promising and talented Sam Sunderland (KTM) in the spotlight. The sometimes underestimated Briton took the win to become leader of the GC. Just behind him we saw the very talented Pablo Quintanilla (KTM) and following his shadow was Matthias Walkner (KTM). 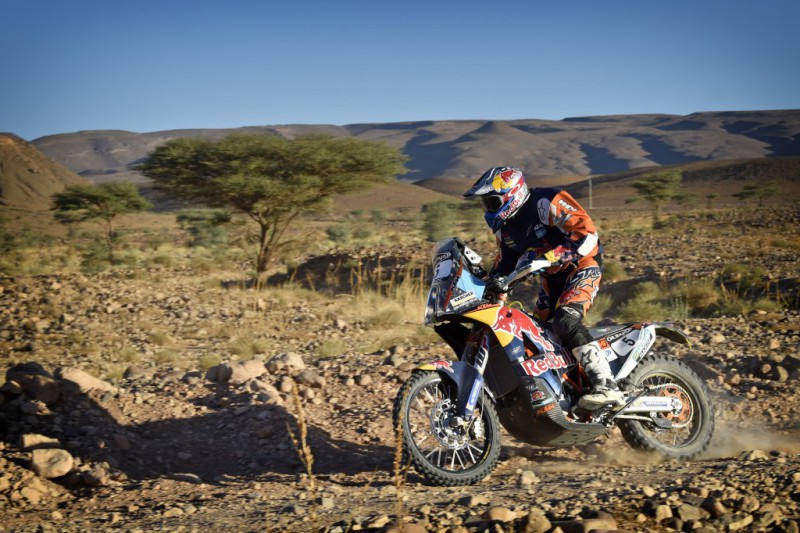 There is a somewhat casual spirit around this OiLibya Rally of Morocco, most of the top-drivers ensure they come here without pressure, yet to see the face of Joan Barreda (Honda) on arrival, we understand that the stakes are still high. The Spaniard opened the stage throughout without being joined. Upon arriving however, he learned that he had not negotiated the dunes as well he thought. He is fourth today at 8’59 ”.

Sunderland, started seventh and came back so strongly that he recovered back 6’03 ” that he had left on the first stage and goes even beyond to build up a nice cushion of 2’33” on Barreda. “I caught a bit of dust from the other guys but I managed to get through them and not make any mistakes with the navigation. I am not scared by the fact I have to open the track tomorrow. Today, for over 60 kilometers, I could not see the track”.

KTM has a great day and managed the triple with Pablo Quintanilla and Matthias Walkner taking the second and third places respectively at 5’38” and 5’55”. Both drivers are in a close fight for the World Championship crown and on the track, it’s also really tight. “At the beginning it was a little bit difficult to get the rhythm but after 100kms I felt better” says Quintanilla.

We wonder what happened to Paulo Goncalves? The HRC Honda rider had started quite timidly, conceding 6’03” on the first day. Although nothing dramatic had happened, at the first CP on stage 2, he was already … 8’40 ‘ behind’ and on arrival he is down to 10’48 ”. It is not yet known exactly what the reason is since the Portuguese driver was not so talkative on arrival except with members of his team to whom he obviously had something to say. Just what it was we don’t know. The team members left looking a little upset and when we asked what had went on, the team members said that they did not know. The situation is not hopeless though as long as the former world champion is still fifth overall at 10’25 ”.

The second and third of yesterday, Toby Price (KTM) and Helder Rodrigues (Yamaha) failed to take the advantage of Barreda opening the track. They are eleventh (at 18’15 ”) and seventh (15′ 06”) and therefore are outside the top 5 overall.

Tomorrow Sam Sunderland will open the track on a stage of tricky navigation. As this is an unaccustomed exercise for him, the KTM rider will have to show what he is capable of as, after the retirement of Marc Coma, the roles have yet to be assigned in KTM before the next Dakar. 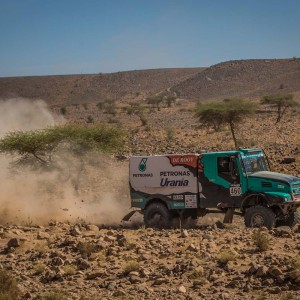 Gerard de Rooy had to take the second day of the OiLibya Rally with care. In the dunes he couldn’t deflate the tyres enough...
Copyright 2011-2016 Rallyraid.net - RISE Network. All Right Reserved.
Back to top