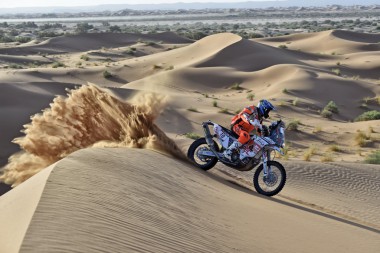 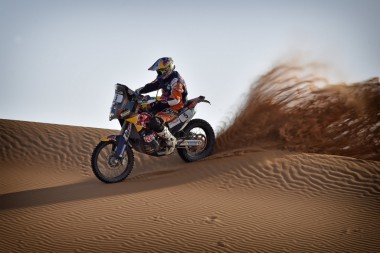 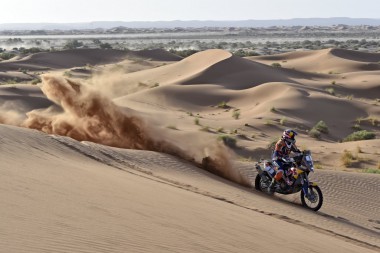 The three riders are now second, third and fourth in the overall standings after the 417 km stage that took them on a loop of De M’Hamid and included a 274 km timed special.

And while Sunderland had to concede the overall lead by 3 minute 57 to Joan Barreda, it was Austria’s Walkner who was the strongest of the trio. He finished third in the stage, just 3.01 minutes behind the stage winner Paolo Goncalves, while teammates Quintanilla and Sunderland were fourth and fifth at 5.05 and 7.48 behind the leader.

It was up to Sunderland as the second stage winner to open the track on Wednesday, and with 80 km of piste at the start of the day the KTM riders opted to take a cautious approach and not take any risks, factory team manager Stefan Huber said later. Riders were also faced with a tricky technical section in the second half of the stage, which was very rocky, and like Tuesday’s Stage required plenty of concentration.

The Morocco Rally is particularly important for both the Austrian Walkner and his Chilean counterpart Qunitanilla. After world championship leader Marc Coma announced his retirement from rally raid sport in the summer, Walkner and Quintanilla are only two points apart and the top candidates to take the 2015 title in this, the final round of the 2015 series.

Walkner said the stage had been quite difficult with rather a lot of sand and very many dunes. “After 20 km I got lost but was quickly able to find my way back on track. But there was then a big gap to riders in front of me just before we went into the dunes at the 50 km mark. I tired to follow the tracks as best I could but I tipped over twice because the ground was unpredictably soft in places. I was able to catch up to the two in front of me by 110 km, and then they made a small mistake. I caught up to Pablo (Quintanilla) 300 meters from the finish and we rode in together. Today was a step in the right direction. It was a very cool stage but also quite exhausting.”

Laia Sanz, the team’s only female factory rider, also made a very good recovery in Stage Three, moving up to eleventh place. The Spanish rider picked up a big 15-hour penalty in Stage One as a result of a technical difficulty but is using the rally as important preparation for the Dakar Rally in January. Laia said she had ‘eaten a lot of dust’ on Tuesday after having to start at the back of the field but was committed to putting in as much time a possible on the KTM 450 RALLY ahead of the Dakar.

The KTM factory team did however take a knock on Wednesday with three riders, Jordi Viladoms, Toby Price and Antoine Meo all missing from the start because of a stomach bug that made it impossible for them to ride. Meo may be able to continue in Stage Four, however it is not yet certain if the others will be able to start.

Riders face a long day in the desert on Thursday where they rider 641 km, including a timed special of 293 km in what is the longest stage in this year’s edition. They travel from Zagora to Agadir. The rally, which is an important part of the factory teams’ pre-Dakar Rally preparation, concludes on Friday. 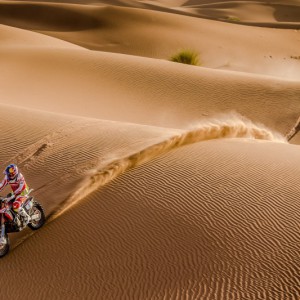 Honda CRF450 RALLY riders Paulo Gonçalves and Joan Barreda pulled off an excellent double in the third stage of the OiLibya...
Copyright 2011-2016 Rallyraid.net - RISE Network. All Right Reserved.
Back to top