It’s almost a historical day. Coming back to rally raid earlier this year, Peugeot needed time to get their bearings, as team manager Bruno Famin explained. After the double victory in China Silk Road Rally, Peugeot got their first prestigious victory in five star competition with the second stage of the OiLibya Rally of Morocco. The stage had a merciless yet respectful close fight between Carlos Sainz (Peugeot), the winner of the stage and Nasser Al-Attiyah (X-Raid Mini). And as dominating as they were yesterday, the Toyota Overdrive were a step behind today.
Kilometre 167, Al-Attiyah is the first past CP2, followed by Sainz 2” behind! Both stay bumper to bumper. The two men are engaged in a great battle. “the last 50/60 kilometers, Carlos caught us and after he made a mistake and we passed him and we pushed. It was fantastic to fight”. On arrival, the Qatari is beaten by 1’49”. 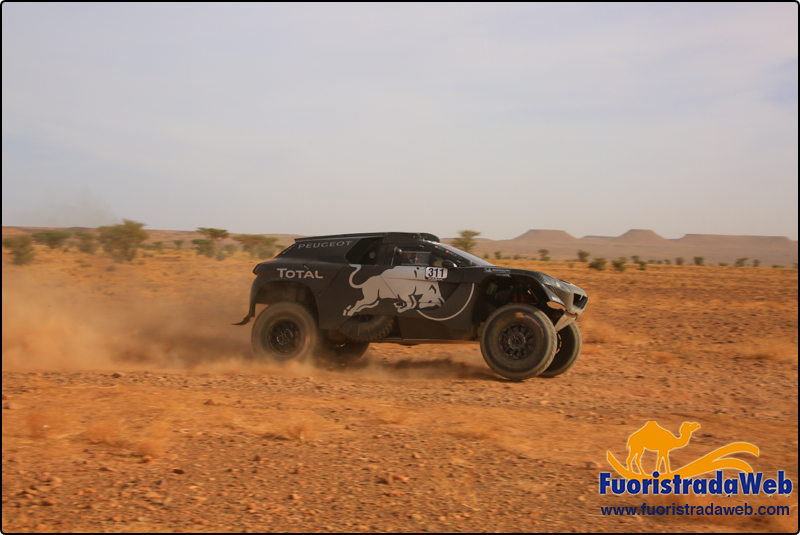 Sainz reassures the Peugeot team who needed it after the failure of Sebastien Loeb yesterday. “El Matador” also revives success in a stage, which he has not had for a while now. Already at the first stage he was fighting for victory before suffering a puncture at about fifteen kilometers from the finish. Today, there was no problem. “I’m happy,” admitted Sainz, who gives the impression to be relieved by this return to victory. At the same time, he took command of the overall standings with 1’24 ” ahead of Al-Attiyah.

With the fight happening at the top with Sainz and Al Attiyah Toyota Overdrive is a little behind. Yazeed Al Rajhi opened the track at the start: “After the CP1, we lost the road and in the dunes, my seatbelt was came out from the bumps”, he explains. The Saudi is fifth with 10’16 ” behind at the finish. His teammate Vladimir Vasilyev was also a bit behind. A witness of the fight Sainz / Al-Attiyah, he lacked a little something to be there in the fight with them. Moreover puncture delayed him at 15 kilometers from the finish. He now loses 11’33” (seventh), but mainly he sees his hopes in the battle with Nasser Al-Attiyah for the World Championship title dwindle.

But there are nevertheless there is a positive today at Toyota Overdrive in the third place of Giniel De Villiers. Only ninth yesterday because of a differential problem, the South African reassures: “We struggled at the beginning with the dust to get past but the car went well and we had quite a good run”. However, his delay on the GC is now 18’20 ”.

Sebastien Loeb had to wait 24 hours longer than expected to complete a stage in rally raid. Sixth of the day today at 10’30”, he demonstrates that he fits well into the discipline and his co-driver Daniel Elena, got to gips with the roadbook. “It’s nice to finish our first stage in the Rally-Raid without getting lost”, says Loeb. “We were embarrassed at the start of this stage because we started further back in the schedule. After a while I began to overtake some cars and it was better, so after I had good conditions on the end of the stage. ”

The battle for the GC looks as though it will be a decider between Carlos Sainz and Nasser Al-Attiyah and a bit further behind, Yazeed Al-Rajhi (at 8’13 ”) and Vladimir Vasilyev (at 9’47 ”) for the last step of the podium. But the race is still long and we know the reliability of the Mini, but we still don’t know anything about the 2008 DKR. But if there is one thing for sure that we know is that we should not underestimate the power of the Toyota Overdrive. The race remains open for now. 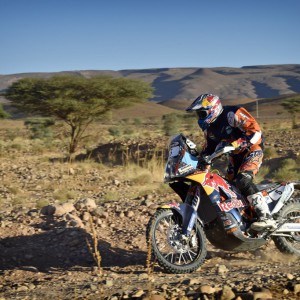 Joan Barreda (Honda), who quite surprisingly, given the injury he comes back from, won yesterday’s stage and so had the task...
Copyright 2011-2016 Rallyraid.net - RISE Network. All Right Reserved.
Back to top