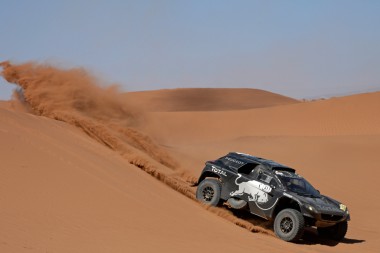 The new PEUGEOT 2008 DKR16 claimed its maiden stage win today in the hands of Carlos Sainz and Lucas Cruz. The ongoing development programme is starting to pay dividends, while Sébastien Loeb and Daniel Elena continued their apprenticeship of cross-country rallying with sixth place on the second stage in Morocco in their 2015-spec car.
As work continues for Team Peugeot Total, the 223 competitive kilometres of today’s Rallye du Maroc programme provided competitors with a different type of terrain to Monday as the rally moved into the week’s first dunes, along with some complex navigation.

The PEUGEOT 2008 DKR16 produced a surefooted run in the conditions to confirm its promising potential as Carlos Sainz and his co-driver Lucas Cruz claimed the day’s victory after catching the Mini of the 2015 Dakar victor Nasser Al Attiyah. The PEUGEOT 2008 DKR16’s first stage win has taken the Spanish pair to the top of the provisional leaderboard, 1m24s clear of the Qatari.

Sébastien Loeb and Daniel Elena started 19th in today’s order and lost a significant amount of time in the dust thrown up by other cars. This failed to hamper their apprenticeship, however, and they ended up collecting the sixth-best time which was a good result given their running position. It was also a fitting way to reward their mechanics who worked until five o’clock this morning to change their engine.

Carlos Sainz, PEUGEOT 2008 DKR16 #311 (1st on SS2, 1m49s clear) “I’m naturally very pleased to have scored our first stage win with Peugeot and to have notched up the 2008 DKR16’s maiden victory. We pushed hard and we are learning more and more about the car with every kilometre we complete. You can see that all the work that has been done has been a step in the right direction, even though there’s still a great deal more to do.”

Sébastien Loeb, PEUGEOT 2008 DKR15+ #312 (6th, +10m30s) “Things went better today and we managed to finish the stage without any problems. Although we lost a lot of time in hanging dust initially, we ended up finding a good overall pace. The feeling was good. We didn’t make any navigational errors, either, even though the stage was quite a challenge from this point of view.” 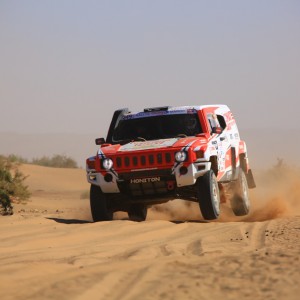