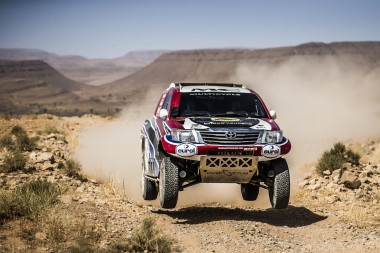 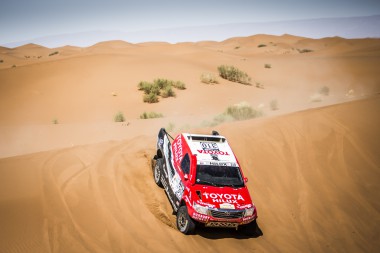 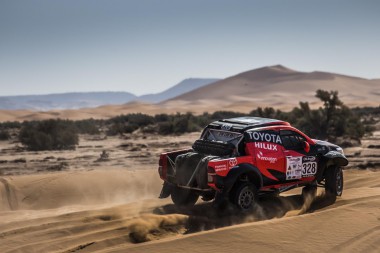 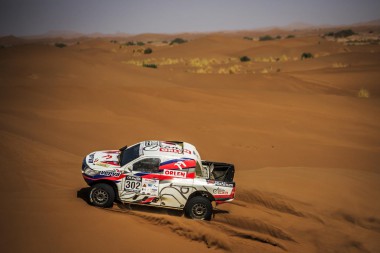 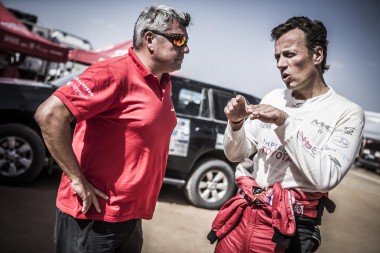 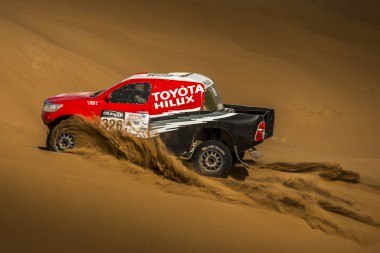 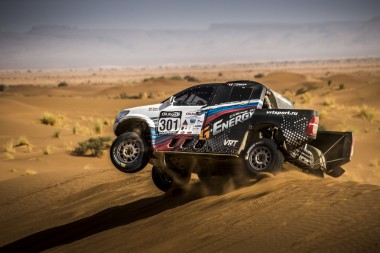 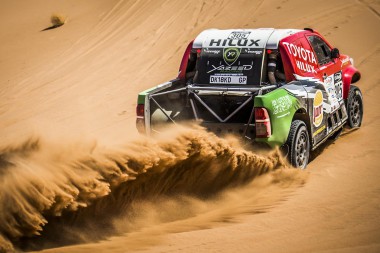 Overdrive Racing and Hallspeed enjoyed a superb OiLibya Rally of Morocco, with four of the team’s Toyota Hiluxes finishing in second, third, fourth and sixth overall and the other three completing the five-day rally in ninth, 12th and 13th overall.

The ninth and penultimate round of the 2015 FIA World Cup for Cross-Country Rallies finished in Agadir on Friday afternoon after five punishing selective sections through the Moroccan deserts.

The team also earned three stage wins, courtesy of Al-Rajhi and his German co-driver Timo Gottschalk’s success on the first and fourth specials and De Villiers’s success with Dirk von Zitzewitz on the final timed test.

“I am more than happy with the performance and reliability of the cars and the result here,” said Overdrive Racing’s team director Jean-Marc Fortin. “We won three of the five stages, like Egypt, but with the FIA regulations we are still down on power and torque compared to the diesel cars. This is very frustrating.

“Apart from a drive shaft issue for Giniel (De Villiers) on the first day, we did not have any problems with the cars. This bodes well for the Dakar. I am confident that we will not stop a lot on the Dakar and will have strong and reliable cars there.

“For sure, the championship is over now. Vladimir (Vasilyev) finished second. That is the end of a long season for us, with the Dakar, the FIA World Cup events and a race in Brazil. We must focus our attentions to Dakar 2016 now and we have decided not to take part in the last round of the FIA World Cup in Portugal (Baja Portalegre) at the end of the month.”

The Overdrive Racing Toyotas made a superb start to their Moroccan campaign on the 330km loop around the Zagora bivouac through a sea of demanding sand dunes. Al-Rajhi clocked the quickest time of 3hr 13min 36sec and that put him 17 seconds in front of Vasilyev and gave the team a superb 1-2 start.

Poulter came in sixth in the first of the two Toyota SA cars, Ten Brinke was 11th, Dabrowski finished 15th and Chabot was 16th. De Villiers was running as high as seventh despite breaking a drive shaft and being forced to run in two-wheel drive. He finished the stage in ninth. Ten Brinke could also have finished higher had he not fractured the sump on a rock and stopped to add oil to the engine.

Former World Rally Champion, Carlos Sainz, claimed victory on the second 244km stage that wound its way through the Draa wadis and valleys, but De Villiers was on a competitive pace from the outset and clocked the third quickest time. Al-Rajhi suffered from running first on the road and he was caught by some of his rivals and finished the stage in fifth. Vasilyev and Poulter were seventh and eighth.

It meant that Al-Rajhi slipped to third in the overall standings behind Sainz and Al-Attiyah and Vasilyev, De Villiers and Poulter were classified in fourth, sixth and seventh. Dabrowski and Chabot finished the stage in 14th and 16th positions and held 14th and 17th overall. Ten Brinke lost over 45 minutes to the leaders and slipped down the rankings.

Sainz maintained his lead with the quickest time through the third 274km M-hamid loop stage, but it was a good day for Overdrive Racing. De Villiers, Vasilyev, Poulter and Al-Rajhi were fourth, fifth, sixth and seventh and Ten Brinke, Chabot and Dabrowski were classified in 11th, 13th and 16th.

Al-Rajhi claimed the fastest time on the penultimate stage after stopping the clocks in 2hr 33min 49sec and Vasilyev and De Villiers were third and fourth. It meant the trio held second, third and fourth heading into the final stage after Sainz hit trouble.

Poulter, Ten Brinke, Chabot and Dabrowski rounded off the Toyota contingent in fifth, 12th, 13th and 14th positions, as all seven Overdrive Racing and Hallspeed Toyotas closed in on impressive Moroccan finishes.

The final 237km stage was a loop around Agadir and Overdrive Racing finished the event in perfect style with a stage 1-2-3 finish. De Villiers led the way from Ten Brinke and Vasilyev, with Poulter in fifth, Al-Rajhi in eighth, Dabrowski in 10th and Chabot in 16th.

It meant that the seven Toyotas finished the event in second, third, fourth, sixth, ninth, 12th and 13th – a testament to meticulous preparation, attention to detail and the reliability of the Toyota Hilux on one of the world’s toughest rallies. 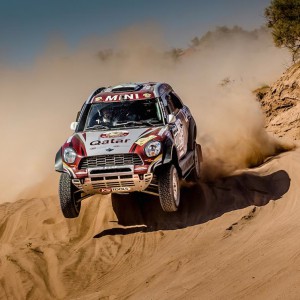 The remarkable run of results for Nasser Al-Attiyah and co-driver Mathieu Baumel continued this week at the Oilibya Rally...
Copyright 2011-2016 Rallyraid.net - RISE Network. All Right Reserved.
Back to top