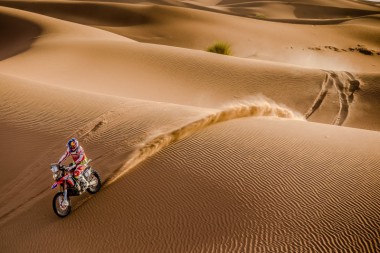 Honda CRF450 RALLY riders Paulo Gonçalves and Joan Barreda pulled off an excellent double in the third stage of the OiLibya Morocco Rally which was fought out in the M’hamid loop. The Spanish ace retakes the top of the overall leaderboard.

Team HRC have made it to the halfway stage of the rally in upbeat mood after clinching the top two finishing spots, a move that also sees the team back at the head of the overall standings.

The M’hamid desert region to the south of Zagora, bore witness to a battle in the OiLibya Morocco Rally from which the Honda CRF450 RALLY crew emerged victorious. Paulo Gonçalves was the fastest over the 274 kilometre special stage. The Portuguese rider, forging a cracking pace, was clearly coming to grips with the bike in a performance which shaved various minutes off the rivals ahead in the general rankings.

Joan Barreda joined team-mate Gonçalves on the stage podium as he reinstates himself at the head of the overall table with a near four-minute surplus over the closest rival. The forthcoming stages will prove vital for the Spaniard’s aspirations. 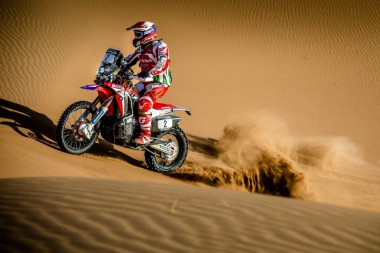 Italian Paolo Ceci started the third day from back positions which meant having to deal with a dust cloud throughout the early part of the timed section and therefore he was unable to take maximum advantage of the Honda CRF450 RALLY. Yesterday, race organisers had given back the ten-minutes which Ceci lost after stopping to aid a rider involved in an accident.

Jean Azevedo seemed to be coming to terms with the new bike over all kinds of varied terrain: track, sand, dunes and even a rock-filled final stretch and moves up to thirteenth place in the general standings. 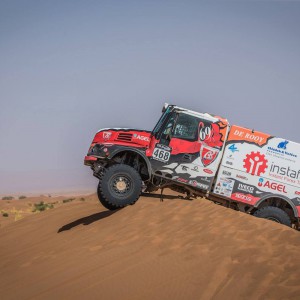 Two punctures caused by jagged rocks and sharp stones cost Gerard de Rooy 20 minutes in total in the third stage of the OiLibya...
Copyright 2011-2016 Rallyraid.net - RISE Network. All Right Reserved.
Back to top