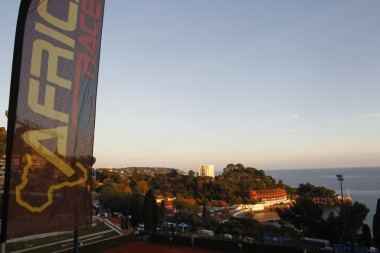 For two whole days the principality of Monaco held the start of the Africa Eco Race. The advantage of organizing an event on the French Riviera, is that even during this time of the year the weather is very nice. That was the case during this last weekend of the year where we had a lovely blue sky with not a cloud in sight and a thermometer gauge that was approaching the 20 degrees. This guarantied us a successful first time start from Monaco for this sport.

It was 2:12pm exactly when the first motorbike rider presented himself under the first starting arch of this AFRICA ECO RACE 2016, installed just for the occasion with the Parc Fermé on the Quai Antoine 1er just in front of the famous STARS’N’BARS Monaco. A big crowed came to the streets of the Principality to see off all the motorbikes, cars and trucks on this fabulous adventure connecting Europe with Africa for the past 8 years. 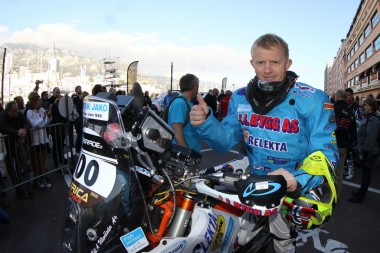 The first to set off onto this open liaison to the port of Séte, near Montpellier in south of France, was the current two wheel title holder Pal Anders ULLEVALSETTER, who fitted for the occasion road tires to his KTM, as the Norwegian insisted to drive this liaison as opposed to put his bike into his assistance vehicle : “With the air temperature as it is, it is a true pleasure to ride a motorbike. This is also a very way to check if everything is alright with the bike before starting on the 5’957 km of roads and tracks in Africa.”

Others decided to be on the safe side like Norbert DUBOIS : “The Bike will suffer enough for the next 15 days that I did not find it necessary to had another 370 km to the km clock before the start of the actual race. We shall go gently to Séte with the assistance, enjoy the cruise over the Mediterranean and we will dive straight into the race on Tuesday morning when we touchdown in Nador.”
Indeed, there is a mixed feeling on how to aboard the race, but all the competitors are here for the same thing, to arrive at the Lac Rose in Dakar on January, 10 2016.

Unless a major problem, this should be the case for vast majority of the competitors as the specific sporting rules of the AFRICA ECO RACE, offers you the possibility to continue in the race, even after missing multiple CP in a same day. 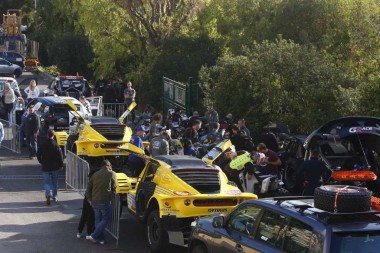 A big advantage that all the car teams will not of course take advantage of, they will want to not miss any CPs. We must note that never since its start in 2009, the grid of the AFRICA ECO RACE has been so impressive and at the same time with such an equal skill level. Indeed, Jean Antoine SABATIER, the winner of the last year’s edition, will have to be tough with his BUGGA ONE if he wants to makes it two crowns on this rally. The competition is strong, especially with the Team MD Rallye Sport running its eight OPTIMUS’s especially the ones of Pascal THOMASSE, Jean Pierre STRUGO and Dominique HOUSIAUX, three important names in the off road rallying world, who have decided this year to come back and drive on the African Sand.

Nevertheless, the title holder will have the advantage of knowing what to expect, just as Mathieu SERRADORI who was fighting for the title all the day until two days from the finish when he had to abandon because of mechanical issues. The Frenchy who this year has a brand new buggy, who very confident when talking to his many fans become neighbors to encourage him : “Even though I have not driven much in my buggy, I know that the car has a fighting chance with the best. I do not want to get ahead of myself, the race is very long, and I will try to be as constant as possible and do the least amount of errors. We have many competitors in the two wheel drive category but we must not forget the 4×4 and GRIGOROV, who proved already last year than when he does not have any issues he is very quick. I must also be careful of the Kazakhs cars who have hugely improved. Anyways the race is on, and I am excited to arrive in Morocco.”

That was a very detailed analyse of the main competitors, to which we must add LEAL DOS SANTOS in his NISSAN pick up, and of course not forgetting the Tarek buggies of Yves FROMONT and Patrick MARTIN. 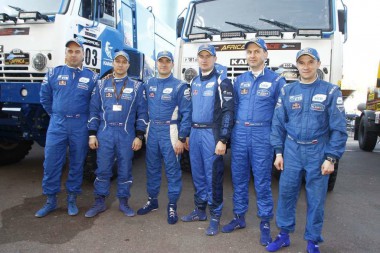 Nevertheless the vehicles that attracted the most emotion, was the trucks and noticeably the two KAMAZ who are the favorites in their category. Having said this, in Africa nothing is over until the end, and the Russians will have to be careful of the TATRA driven by Thomas TOMECK, a three times champion of this race category, the SCANIA driven by Mikklos KOVACS, the MAN of the Portuguese Elisabeth JACINTO and also the French Jo ADUA who’s driving skills must no longer be proven, and for this event he will be driving a MERCEDES.

After the liaison to Sète, a port on the riviera in the Languedoc region of France, the 200 vehicles and 450 people who constitute the caravan of this AFRICA ECO RACE 2016 will get into a 36 hour ferry crossing of the Mediterranean towards Nador, in the north of Morocco, which the boat will reach in the early hours of Tuesday December 29th. For this first day there is planned a short 100km stage and a 500 km liaison to the region of Erfoud. 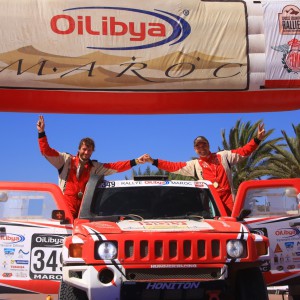 Some people think, car racing is easy: you are just sitting in your vehicle and so you don’t need to be so fit to be successful....
Copyright 2011-2016 Rallyraid.net - RISE Network. All Right Reserved.
Back to top