Tomas Ourednicek and Pavel Vaculik finished their second season in the Hungarian Championship successfully: they won the title of category T1.1.2 and finished 4th in the overall classification. The crew of Buggyra Ultimate Dakar received their well deserved trophies in Balatonfüred. 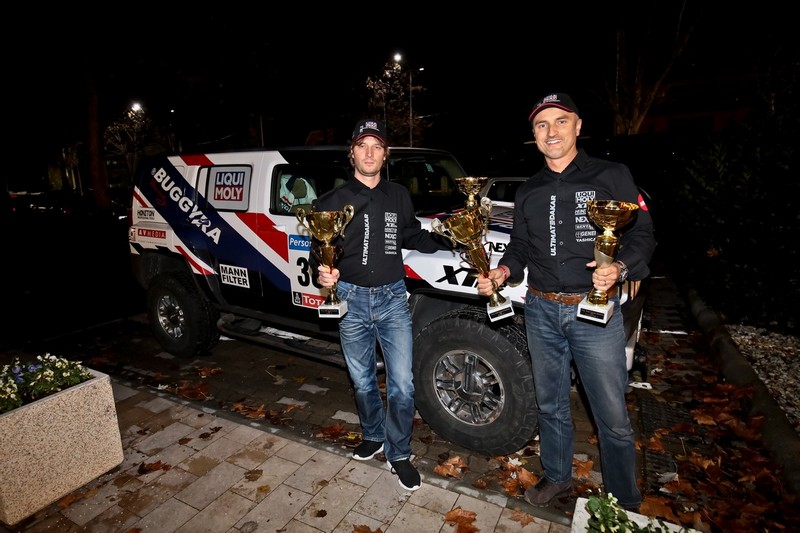 Tomas Ourednicek and Pavel Vaculik repeated their result of last season by winning category T1.1.2 of the Hungarian Championship and occupying the 4th position overall, despite they had to miss one round of the series. The season was long and not always easy, but Tomas and Pavel have some fond memories from the Hungarian tracks from 2015.

One of this was Gyulai Várfürdő Cup, one of the favourite races of Tomas, where they snatched the last podium position on the last day, being involved in a great fight, and also Euro-Tools Cup in Bábolna, where the crew scored their first ever stage victory.

Beside the Hungarian races,Tomas and Pavel took part in numerous other events. Of course, the biggest experience was brought to both of them by those World Cup rounds that they tackled for the first time this year. Both Baja Aragon in July and Morocco Rally in October were long, hot, and had a huge field full of Dakar stars, all of them making these prestigious events a good preparation for the Dakar.

In Spain, Tomas and Pavel not only completed successfully their longest ever day in cross-country rallies (457 kilometres against the clock, in two parts), but, despite having problems, they managed to climb up 14 places in the overall classification. Morocco held not only one but two big moments for the crew: the first encounter with the dunes in race, and reaching the finish line of their first ever desert rally, together with such renowned drivers as reigning Dakar winner Nasser Al-Attiyah or 9-time WRC champion Sebastien Loeb.

“We gained important experience during this long season and learnt a lot about the car, racing tactics, and even about ourselves. It wasn’t always easy but I believe that all this will pay off during the Dakar. In the Hungarian Championship we managed to repeat our result from last year despite missing the last round, and most importantly, we managed to finish our first desert rally. Although no one can be really prepared for the Dakar, I think we did our ‘homework’ and we are looking forward to the big start!” Tomas Ourednicek summarised the season.

The vehicles of Buggyra Ultimate Dakar are already on their way to South America, the crew and the mechanics follow them at the end of December. The 2016 edition of Dakar Rally will begin with a ceremonial start and an 11-kilometre prologue on 2 January in the Argentine capital Buenos Aires.