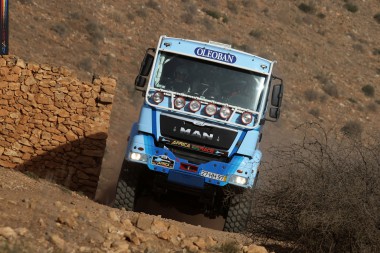 The Portuguese pilot Elisabete Jacinto reached today, in the first stage of the Africa Eco Race held between Nador and Jorf El Hamam, the fourth place among trucks and the 12th position in the joint classification of cars and trucks. The OLEOBAN® team fulfilled the route in 44m06s having made just another 6m41s than the first of the overall classification. In the truck race, the Kamaz of Sergey Kuprianov was the fastest on the track, but the Portuguese trio was always on its trail and managed to finish with a short gap of 2m11s for the Russians.

This first day of competition, due to delays in the arrival of the boat in Nador and for security reasons, the organization chose to cancel the special for the bikes and cars and trucks only held half the route, and made about 46 timed kilometers.

Still, the first day of competition wasn’t easy, since much of the route was composed of stony and narrow paths. But for Elisabete Jacinto this special was a good start, “despite having taken a lot out of us, because it was necessary to have a lot of technique and expertise in driving and navigation was also quite difficult, this stage went very well. Today we only did half of the special because there was a big delay on the arrival in Nador and for security reasons the organization decided to cancel the stage for motorbikes and cars and trucks only fulfilled half the route. We did the entire special on the right track and we didn’t lose ourselves not even once. Right now, I’m still trying to adapt to the changes we made recently to the truck and I feel some difficulties in driving. I know that from now on I will be able to evolve and tomorrow we will do our best to achieve good results and fulfill the goal of finishing on the podium”, said Elisabete Jacinto.

Tomorrow will be fulfilled the second stage of the Africa Eco Race 2016 that will be held between Jorf El Hamam and Tangounite. Altogether, it will be made 313 timed kilometers. The route consists largely of sand and stony trails. The Erg Chebi, located near Merzouga, will be the first major challenge for the pilots that will face the first dunes of the competition. 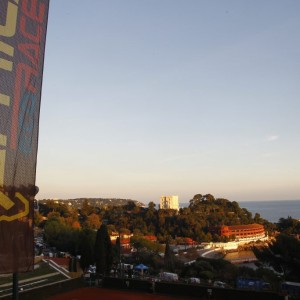 For two whole days the principality of Monaco held the start of the Africa Eco Race. The advantage of organizing an event...
Copyright 2011-2016 Rallyraid.net - RISE Network. All Right Reserved.
Back to top