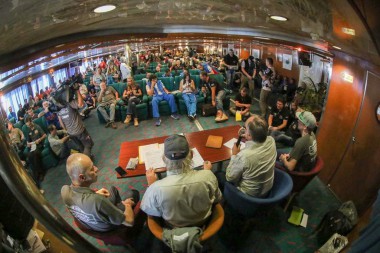 After a day and two nights on the Mediterranean Sea to travel from Sète in the south of France to Nador in the north of Morocco, the AFRICA ECO RACE caravan landed with over three hours delay from the initial time agreed with the ferry company. This then caused the issues with the schedule of the stage and made it impossible to complete the full stage. Jean Louis SCHLESSER and René METGE took the decision to cancel the bike leg so that they could start the long liaison immediately to the Bivouac in Jorf El Hamam, not very far from Erfoud, so that they arrive as early as possible. On the other hand, the cars and trucks completed a shorter version of the initial route, as we decided to place to the end of the leg at the CP1, making the leg only 47km long. 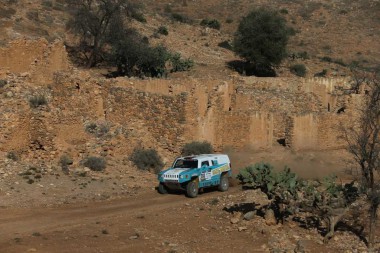 The least we can say is that this 8th AFRICA ECO RACE has started in warp speed, even with such a short leg. The fastest cars of the day without any question were the two cars from the Kazakhs MOBILEX team, as Yuriy SAZONOV in his HUMMER won the first stage of the rally. He did so in flying colors by beating his teammate Kanat SHAGIROV in his TOYOTA by 02’52’’. This is a significant gap especially as the leg was only 50km, this highlights SAZONOV constant evolution we have been seen recently.

On this very typical Moroccan stage, the four wheel drive cars definitely had the upper hand as the Portuguese driver Ricardo LEAL DOS SANTOS in his NISSAN finishes 3rd and only 10’’ behind SHAGIROV and he finishes 01’37 in front of Anton GRIGOROV in his OSCAR. The Hungarian Balazs SZALAY, who last year was a victim of many barrel rolls on this very stage, made peace with his demons by positioning his OPEL in 5th position in the car ranking, just in front of Pascal THOMASSE who is the first of the two wheel drive category with just over 5 minutes from the leader. Mathieu SERRADORI signs the 2nd time of the day in the Buggy war with his proto just in front of the TAREK of Patrick MARTIN. It is with engine problems that Dominique HOUSIEAUX finished in 33rd position 30 minutes behind the leader.

Finally in T2, the production car category, the fight is on with the FORD Raptor of the Russian Alexander TERENTYEV leads with 38’’ in front of the TOYOTA of his compatriot Marat ABYKAYEV, as for the French driver Joseph ROSSO he takes 3rd position with his NISSAN. 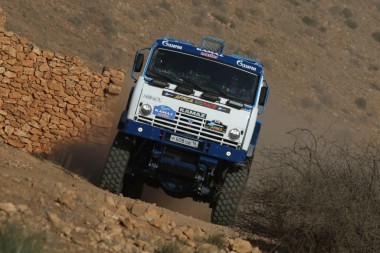 Sergey KUPRIANOV was very impatient to get out onto the track in Morocco as we saw this morning on the boat. The boat’s delay must have increased his motivation to win, as on this first he take the 5th time over all, cars and trucks, in front of his KAMAZ teammate Anton SHIBALOV by 01’04’’.

Behind the Russians, we find Miklos KOVACS the Hungarian who managed to place his SCANIA on the 3rd step of the podium, just 18 seconds in front of Elisabeth JACINTO the Portuguese, who Jean Louis SCHLESSER crowned “The Princess” of the rally yesterday during the briefing on the boat.

Wednesday January 30th, after such a delayed first day all the bivouac will go to bed late, but it will be up bright and early so that the AFRICA ECO RACE can head down to TAGOUNITE during a 313km leg from Merzouga to Ouled Driss. 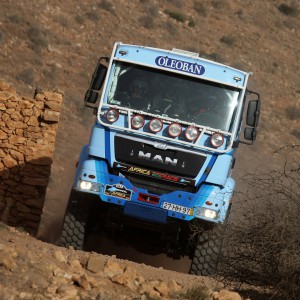 The Portuguese pilot Elisabete Jacinto reached today, in the first stage of the Africa Eco Race held between Nador and Jorf...
Copyright 2011-2016 Rallyraid.net - RISE Network. All Right Reserved.
Back to top