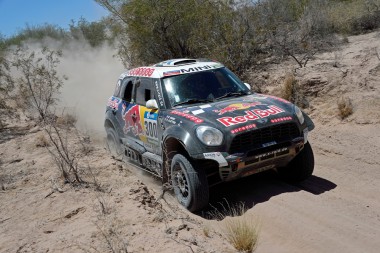 Al-Attiyah made for a lot of excitement and gained ground waypoint by waypoint. In the closing stages he took the lead and even extended his lead on the way to the finish line. “It goes without saying that I’m delighted with having won again”, Al Attiyah said later in the bivouac. “By doing so, we also could extend our lead over Giniel in third position. Today’s special stage was really gruelling but Mathieu and I did a great job right from the start.”

After yesterday’s problems it also was a good – albeit hot – day for Finland’s Mikko Hirvonen. “Things went well for us but it was a tough day, nevertheless,” said the MINI ALL4 Racing driver. “For me as a Scandinavian the temperatures were really high and I actually would have needed some cooling. But at first, the air-condition tube for the cold air broke and then we lost the side-window flap. So I didn’t get any fresh air and I have to admit that this was a problem for me. But I’m delighted that we succeeded in gaining ground on Giniel.” In the overall standings, his gap to Giniel de Villiers in fourth position adds up to some five minutes.

Meanwhile, Roma gained another position in the overall standings. In the closing stages he was faster than Peugeot’s Cyril Despres, thus stealing his sixth place overall. His gap to Leeroy Poulter in fifth amounts to about eight minutes. “This was a nice special stage,” he said. “At half-time we had a great battle with Sébastien Loeb. We passed one another several times without hampering the other. “In the sand and the winding sections I was faster, in the faster sections he had the upper hand. This was big fun. Later I could pass Vasilyev and when we crossed the finish line we had gained so much time that we worked our way up to sixth position overall. I don’t expect a miracle but every kilometre counts and the cooperation with Alex is getting better and better.

Dakar rookie Hunt succeeded in defending his 10 position overall, today. “It was a difficult and long stage,” said the Briton “At first we had a slow puncture and refilled. Later, we had to change it, nevertheless. From this point in time, we tried to take it easy and continue as conservative as possible. So, nothing special happened. In the closing stages, the track once again got tight and winding – that wasn’t big fun. Tomorrow will be another long day – and then, the final stage of the 2016 Dakar will be waiting for us. Now it’s just about coming home.”

Tomorrow, the penultimate stage of the 2016 Dakar will take the field from San Juan to Villa Carlos Paz, the Argentinean city that also was the destination of stage one. After the sandy terrain of the previous stages the Dakar now returns to the mountains and narrow roads offering nearly no opportunity to overtake. The competitors will have to cover a total of 931 kilometres, with the special stage mileage adding up to 481 kilometres. 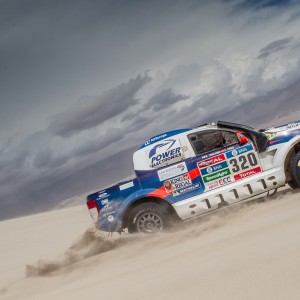