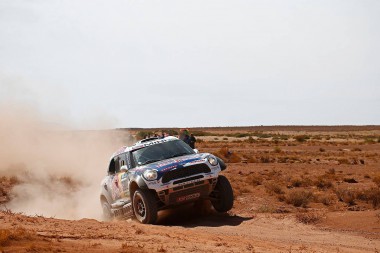 The return to Argentina represented quite a challenge: the drivers had to cover a total distance of 817 kilometres – with 481 kilometres representing the special-stage mileage – interrupted by a neutralisation period for the border crossing to Argentina. Heavy thunderstorms nearly resulted in the cancellation of the second part but the water gauge of the rivers dropped in time and other than the motor bikes, the cars could start into part two.

For the major part of the seventh stage, Nasser Al-Attiyah (QAT) and Mathieu Baumel (FRA) held fourth position but in the closing stages they succeeded in gaining ground – and finished third. Mikko Hirvonen (FIN) and Michel Périn (FRA) continued to deliver in the consistently competitive style they have been displaying throughout the event so far and finished fifth, just 40 seconds behind the Peugeot of Stéphane Peterhansel. Thanks to this result they now hold fifth place in the overall standings. While Nani Roma and Alex Haro (both ESP) finished 10th, Orlando Terranova and Ronnie Graue (both ARG) were hampered by problems and so, they had to settle for finishing 41st, in the seventh stage.

Tomorrow, the Dakar stays in Salta, Argentina, for the rest day. This name, however, does not even tell half the truth. The mechanics will subject all the MINI ALL4 Racing vehicles to a complete check to prepare them for the second week of the Dakar. Meanwhile, the drivers may sleep late but also have to take time for the media. And in the afternoon, the navigators will begin to work on the road book for stage eight to Belén. 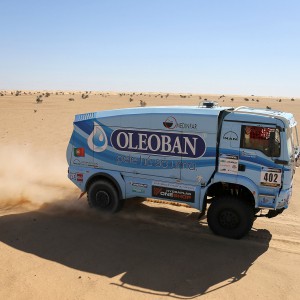 The Portuguese pilot Elisabete Jacinto secured today the third place among trucks in the 2016 edition of the Africa Eco Race,...
Copyright 2011-2016 Rallyraid.net - RISE Network. All Right Reserved.
Back to top