Dakar – Peterhansel and the PEUGEOT 2008 DKR control the race 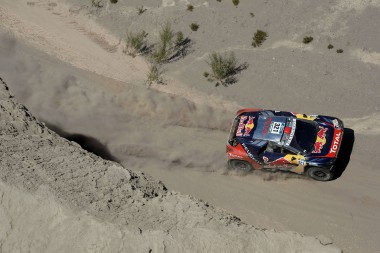 The crew of Stéphane Peterhansel and Jean-Paul Cottret limited their risks today on a long and complicated stage. They set the fourth-fastest stage time and maintain an overall lead of 51m55s with just two stages of the rally left to go.

The leading PEUGEOT 2008 DKR crew can count on two guardian angels: Sébastien Loeb and Cyril Despres. Both remained in contact with their team mates throughout the day, ready to assist if necessary. In the end it was the crew of Sebastien Loeb and Daniel Elena who benefitted from the help of Cyril Despres and David Castera to reach the end of the stage following a transmission failure two kilometres from the finish. Nonetheless, the Franco-Monegasque crew still sealed the second-fastest time of the day.

Stéphane Peterhansel (PEUGEOT 2008 DKR n°302), 4th on the stage
“We felt quite a lot of stress today. It wasn’t an easy stage in terms of navigation. There were plenty of changes in direction, with patches of fesh-fesh that weren’t easy to spot. As we were first on the road, it wasn’t so easy to judge the right pace. We started to look after the car; being careful in all the places that the grip changed in order not to put too much stress on the transmission, for example. We’re in safe mode but still fully concentrated, as there are many things that can catch you out. If you go too slowly, you lose concentration. So you have to find the right balance and that’s not obvious. Since yesterday we’ve had to manage our race in a slightly different way. We’re not pushing the car at all in the tricky places.”

Sébastien Loeb (PEUGEOT 2008 DKR n°314), 2nd on the stage
“The day went quite well. We struggled a bit at the beginning in the dust, as we soon caught up Nani Roma. So we lost a lot of time overtaking him.  Then, two kilometres from the end, the transmission broke. Luckily, I had just passed Cyril only about a kilometre earlier. It was good of him to stop and tow us all the way to the end, so we were lucky. It’s definitely the first time that I’ve set a second-fastest stage time on the end of a tow rope!”

Cyril Despres (PEUGEOT 2008 DKR n°321), 8th on the stage
“It was a very physical stage, with more than five hours of turning the steering wheel in every direction. We never really found a proper rhythm. About 20 kilometres from the end of the stage we ripped off a pipe from the automatic tyre inflation system, but luckily this didn’t force us to stop. Sébastien overtook us three kilometres from the finish but just a kilometre later we found him with a tow rope in his hand, asking us to tow him to the stage finish.” 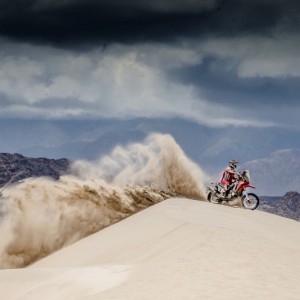 Paulo Gonçalves was forced to retire from the stage between La Rioja and San Juan today after a serious crash that led to the rider...
Copyright 2011-2016 Rallyraid.net - RISE Network. All Right Reserved.
Back to top