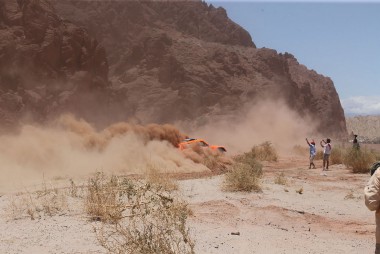 After a disastrous Stage 8 on Monday, Team SPEED teammates Robby Gordon and Sheldon Creed looked to come back with a strong effort on Tuesday, and gain some time back on the leaders as the rally would move into the dunes for the first time.

The common theme of the 2016 Rally is weather, and once again it would become a major factor. This time not for heavy rain or hail, but extreme heat with temperatures exceeding 120 degrees, ASO officials decided the Special would be shortened by 100 km.

Toyo Tires/TRAXXAS driver Robby Gordon would start among the top 20 in the car division for Tuesday’s race after using his second elite driver professional. As gear issues in the previous stage relegated him to a disappointing 60th-place finish. The Stage 9 course presented many challenges with dust and complex navigation, but Gordon and navigator Kellon Walch were able to successfully race their way through the timed section and finish in a time of 4 hours, 21 minutes, 23 seconds which recorded them in the twenty-fifth position of the shortened special.

“Today’s special was one of the hardest I have scene in all of my Dakar’s, I’m just glad we were able to finish with no major issues,” Gordon stated after the completion of Stage 9.

However the story of the day for Team SPEED, would be the notification from ASO officials of the disqualification of Sheldon Creed from the 2016 Rally. Creed, the youngest starter ever in the Dakar’s history would encounter clutch troubles during Stage 8 after getting stuck, while stopped his Toyo Tires/KMC Wheels Gordini would get hit by two other competitors causing extensive damage to the right and left side.

Knowing his race vehicle was beat up, and the crew needed to get started on repairs right away for Stage 9, Creed bypassed a couple waypoints knowing he would be assessed a penalty. To the Team SPEED’s surprise today ASO officials determined his actions were severe enough to disqualify him from the rest of competition.

In his first rally race at the bright age of 18-years old, Creed the 2015 Stadium SUPER Trucks Champion, proved to everyone he is a driver that is able to compete at the highest of levels with the best drivers in the world, and will be a consistent contender for the win in any form of racing he competes in well into the future.

Creed went on to say, “I would like to thank Toyo Tires and Robby Gordon for believing in me, and giving me the opportunity to showcase my driving skills on a world-wide scale. This has been an absolute blast, and an experience I will remember for a lifetime. Looking forward to getting the 2016 Stadium SUPER Trucks season started in Australia in little over a month.”

After nine stages of the 2016 Dakar Rally Sainz has moved back into the overall lead 7 minutes, 3 seconds ahead of second place Peterhansel. Al-Attiyah would claim the third position 14 minutes, 38 seconds back, followed by Hirvonen in the fourth position 34 minutes, and 50 seconds back, while South African De Villers holds the fifth position 53 minutes, 18 seconds behind.

Robby Gordon’s top twenty-five finish today would move him up to the thirtieth position in the overall standings 9 hours, 38 minutes, and 29 seconds behind.

Wednesday’s decisive tenth stage of the rally will bring competitors through the Fiamblala dunes, on the longest dune section in the history of the Rally. Traditionally the HST Gordini Supercar’s are very good in the dunes, but don’t look for Gordon to take any risky maneuvers that may take him out of contention of finishing the rally in the Top-25 with only four stages remaining. 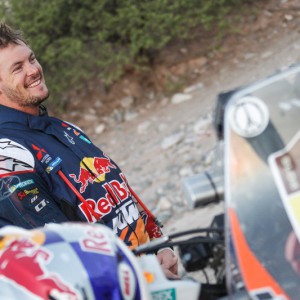 Red Bull KTM factory rider Toby Price on Tuesday took yet another stage win at the Dakar Rally 2016 and now also has a commanding...
Copyright 2011-2016 Rallyraid.net - RISE Network. All Right Reserved.
Back to top