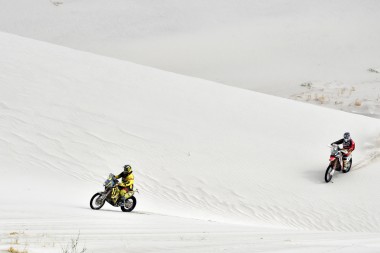 Slovak KTM rider Stefan Svitko, competing in his seventh Dakar Rally, on Wednesday mastered the second half of the second marathon stage to take his first ever stage victory in this epic annual race. Meanwhile, exercising the necessary caution, overall leader Red Bull KTM Factory Racing’s Toby Price finished third in the stage and is now in front by just over 23 minutes.

Price finished behind second-placed Kevin Benavides, just five minutes 47 off the leading time. Paolo Goncalves of Portugal was fourth in the stage, but after problems in stage nine, the rally’s early leader is now 34 minutes 15 behind Price in the overall standings.

Price: “Today was really good. I backed it off a bit to make sure we didn’t make any mistakes and I hit all my waypoints with a big smile on my face. There were no problems, no dramas. It was a strong day and now we just have to try to manage it (the rally) now until the end.”

Commenting after the stage Svitko said he had not expected to be in overall second at this stage of the rally: “There are three more stages before the end but I’m very happy with the classification. I didn’t expect that.”

Riders were coming off the second marathon stage where overnight they are not allowed any contact with their teams and must manage their machinery and tires to last over two days of very hard riding. The first half of the marathon was somewhat controversial after it was called to a halt at the second CP for most of the field. Price and 11 other riders rode over the whole distance, more than 100km more in very tough conditions.

Reflecting on Tuesday’s ride Price, who sealed his fourth stage win that day commented: “It was a tough day, the hardest terrain and in a straight line for more than 100km. I was almost on the limit in the hot temperatures in the sand dunes. It was difficult but we did a good pace.”

“Today was long sand dunes, a few little river beds and about 95% off track. We had to make sure we stayed on top of the road book and made no mistakes. It was very difficult at around the 30km mark, so I took my time around that spot and I think that’s where I lost some time. In the last two days I’ve probably learned more than in my last six rallies. For sure it’s built my confidence up a bit and it shows I can navigate. And yesterday showed I can navigate with a bit of speed.”

Red Bull KTM’s Antoine Meo continued to impress in his debut Dakar ride and finished 7.43 off the lead to be fifth overall. Pablo Quintanilla of Chile was close behind in sixth place. Quintanilla and Meo are currently 4-5 in the standings as the rally goes into its final stages.

Reflecting on his day, Meo commented: “I was riding alone until the first navigation section and it wasn’t so nice to be on my own. But in the end it was good for learning the navigation and how to ride in the dunes.”

KTM factory rider Jordi Viladoms finished 18th in the stage and is now 22nd in the standings. Teammate Laia Sanz was the 40th finisher but is holding at a very competent 16th overall in the rankings. Sanz lost time on Wednesday after a crash but was reported to have reached the finish.

Team Manager Alex Doringer: “The condition of the team is quite good and we’re in a good position. Toby Antoine, Laia and Viladoms did a good job. They worked together like it should be in a team. Toby managed to put some more time on the overall lead, the bike is good and the riders are good. Tomorrow the stage will be very difficult and I think it will be the key stage. It’s very long with difficult navigation and a lot of sand and fesh-fesh and bushes.”

Speaking about Price, Doringer said the Australian rider had shown over the past 10 days why he had been selected to join the factory team. Doringer also commented that while the navigation in the second half of the rally had got more complicated, the first half had also not been easy. “The stages were much faster and this also makes navigation difficult, because you have to read and navigate at speed,” he added.

The rally continues on Thursday from La Rioja to San Juan over another 712km, the longest stage of this year’s edition. It finishes in Rosario on Saturday. 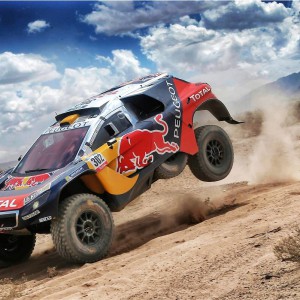 Stéphane Peterhansel (Peugeot) smashed the opposition at the end of a frantic stage in the car category. He rose above the difficulties...
Copyright 2011-2016 Rallyraid.net - RISE Network. All Right Reserved.
Back to top