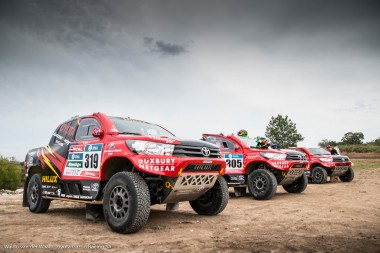 Dakar 2016 is under way! On January 2nd the Toyota Gazoo Racing SA team completed the ceremonial start in the Argentine capital, Buenos Aires, before taking part in the 11 km-long prologue. The prologue was used to determine the starting positions for Stage 1, and for Dakar veteran Giniel de Villiers and navigator Dirk von Zitzewitz, could hardly have done better.

“These short stages are tricky. If you push too hard, you can lose the race before it even starts,” explained De Villiers from the bivouac at Rosario after bringing his Toyota Hilux safely to the end. “At the same time, you need to make sure that you don’t lose too much time to the leaders. To me, anywhere in the top ten was ideal.”

In the end the man from Stellenbosch recorded the 8th-fastest time of the day, just 9 seconds off the pace set by stage-winner Bernhard ten Brinke from the Netherlands, also driving a Toyota Hilux. This sets him up perfectly for the first stage, as the teams ahead of him will have to sweep the road and show the way.

For Yazeed al Rajhi and Timo Gottschalk, in car #305, the prologue yielded a less-than-ideal starting position. The pair lost time in a water crossing near the start of the stage, and even though they managed to power through to the end, they finished in 21st position, 25 seconds behind Ten Brinke.

The biggest upset of the day, however, came when Toyota Gazoo Racing SA’s Leeroy Poulter and navigator Rob Howie caught up with Brazil’s Guilherme Spinelli (Mitsubishi) barely 2 km into the stage. Spinelli had taken a wrong turn, and returned to the correct route just ahead of Poulter/Howie. The pair was stuck in the Mitsubishi’s dust right to the end of the stage, losing 29 seconds in the process.

“It was a really disappointing prologue,” said Poulter at the end. “We could’ve gone so much faster, but unfortunately this is the Dakar, and things like this are all part and parcel of the race. It does leave us with a bit of work to do over the next few days, but we are still upbeat and confident going forward.”

Team principal, Glyn Hall, was confident of securing better starting positions for both Poulter and Al Rajhi: “We’re doing everything we can to give the crews the best possible shot. Unfortunately, a bit of bad luck came into play on the prologue, but there’s still 13 stages to come.”

The day was, sadly, marred by news of an accident on the prologue. Details remain sketchy, but one of the privateer competitors allegedly lost control, injuring a number of spectators in the process. The stage was immediately cancelled, which meant that South African competitors, Sean Reitz (Nissan) and Collin Matthews (Century) have yet to start their Dakar campaigns.

Stage 1, which comes next, is a test in true Dakar style. It features 404 km of liaison, and a healthy 662 km of special stage distance. Even though the highest point of the route is only 1,400 m above mean sea level, the Andes will become visible in the background, as a warning of the high altitudes to come. The stage features undulating tracks on the latter parts, with some fast, open sections near the start. 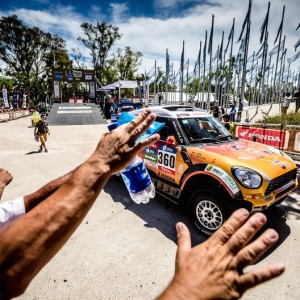 At km 6.6 of the prologue special linking Buenos Aires to Rosario, at 5.59pm, the competitor n°360 got out of the road harming...
Copyright 2011-2016 Rallyraid.net - RISE Network. All Right Reserved.
Back to top