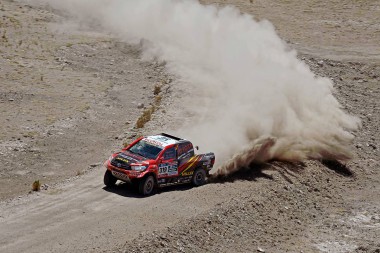 With the stages on Dakar 2016 unwinding, the crews tackled the final off-piste stage of the race from the Argentine town of La Rioja to San Juan on Thursday, January 14th. The 431km-long track was deemed by many to be one of the hardest stages of this year’s race, and finishing it unscathed was an achievement in itself. However, Toyota Gazoo Racing’s Giniel de Villiers and navigator Dirk von Zitzewitz (#301) not only completed the stage without any damage to their Toyota Hilux, but also retained their third place in the overall standings.

“Even so, it wasn’t an easy day at the office for us,” said De Villiers from the searing hot bivouac at San Juan. “We had two punctures on the stage, and changing them cost us more than five minutes.”

The result was that De Villiers/Von Zitzewitz posted a time just over twelve minutes behind stage winner Nasser Al-Attiyah (MINI) – but more importantly, the pair did enough to remain ahead of Miko Hirvonen (MINI), who is currently in fourth. With that said, the Finnish driver gained 04:57 on Stage 11, placing De Villiers under pressure for the final push to the end.

Leeroy Poulter and navigator Rob Howie (#319) again had a clean run on the stage, bringing the Toyota Hilux to the bivouac without any damage. The pair lost time on Stage 11, however, when they missed a tight turn in the dust of a slower competitor. They went down the wrong track for about 3.5 km before turning around and finding the right route.

“As a result, Leeroy and Rob were just over twenty minutes behind the stage winner,” explained Team Principal Glyn Hall after the stage finished.

“This leaves them in 5th position in the overall standings, and with two stages to go, they’ll be sure to push quite hard right to the end.”

Toyota Gazoo Racing SA’s Yazeed al Rajhi and navigator Timo Gottschalk (#305) had a torrid day on Stage 10, but came back strong on the next stage. They were 12th in the overall standings at the start of the day, but despite driving with more caution than usual, still posted the 5th fastest time of Stage 11, moving up into 11th as a result.

Next up is Stage 12, the penultimate stage of Dakar 2016. The stage is 481 km in length, with a liaison of 450 km that will see the crews reach the town of Villa Carlos Paz. This makes stage 12 the longest traverse of the rally, with a total distance of 931 km. The total distance of Dakar 2016 will reach 9,000 km by the end of the stage, with just the final stage to Rosario still to negotiate.

“Stage 12 will bring more pressure for the drivers than I would have liked,” explained Hall. “The length of 481 km is in itself reason to feel pressure, but we also know that Hirvonan will be on max attack to the end. There is a strong possibility that he has knowledge of the route thanks to his WRC days, and the MINIs were faster than we expected already today. I think it will be more of the same tomorrow, and with Nani Roma (MINI) just six minutes behind Leeroy, it all makes for a very tense stage. Yazeed will also be pushing for a good result, so for me it will be a stage spent on tenterhooks.” 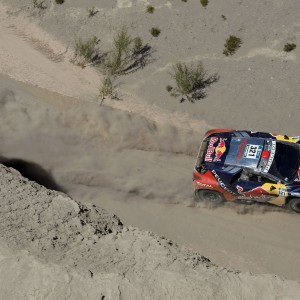 The crew of Stéphane Peterhansel and Jean-Paul Cottret limited their risks today on a long and complicated stage. They...
Copyright 2011-2016 Rallyraid.net - RISE Network. All Right Reserved.
Back to top