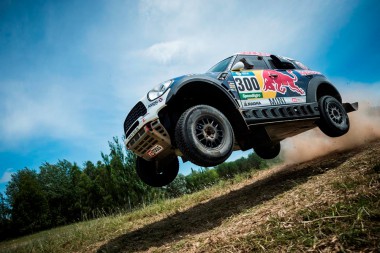 Nasser Al-Attiyah and co-driver Mathieu Baumel welcomed in the new year from their Argentinian base camp as they prepare to defend the Dakar Rally title they claimed in South America 12 months ago. The pair are enjoying a remarkable run of results that saw them follow up their Dakar victory with three more titles before 2016 arrived. The 2015 WRC2, FIA Cross-Country Rallies World Cup and Middle Eastern Rally Championship were all won in fine style by the dominant duo.

Nasser and Mathieu were in relaxed mood on New Year’s Eve as they were reunited with their Mini which had been shipped across the Atlantic. The car has been completely rebuilt since it was last raced so it was essential for a shakedown exercise to be conducted on the outskirts of Buenos Aires. With the engine, suspension, electronics and other vital mechanisms given a thorough workout both driver and co-driver found the car primed to take on the 9,596km of the Dakar Rally.

Nasser talked freely about his ambitions to finish this edition of the world’s toughest race as the only driver to have won three times in South America. The Qatari speedster feels that the long third stage of the race between Villa Carlos Paz and Termas Rio Hondo could prove crucial in determining the final outcome and is targeting a major push along the 510km route.

Mathieu is optimistic that driver and co-driver have the skill set required to deal with the most demanding conditions during the race due to the experience they have gathered whilst competing in extreme terrain and climates throughout the world. The Frenchman is confident that the reigning Dakar champions can come out on top against any obstacle put in their path.

While the crew and mechanics of car #300 hunt for further glory in 2016 those who were left in their dust last year are even more determined to stop them from tasting success once again. With plenty of top rallying talent chasing them down across the wildly unpredictable Dakar route we are all set for another fascinating edition of the world famous desert classic race. 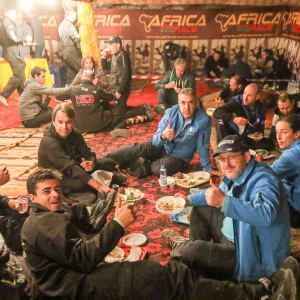 The Portuguese pilot Elisabete Jacinto reached today, at the end of the fourth stage of the Africa Race, that linked Assa...
Copyright 2011-2016 Rallyraid.net - RISE Network. All Right Reserved.
Back to top