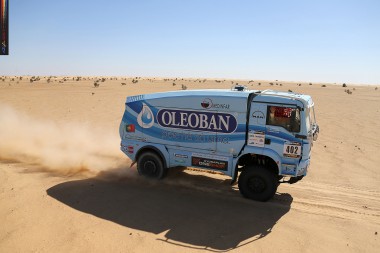 The Portuguese pilot Elisabete Jacinto secured today the third place among trucks in the 2016 edition of the Africa Eco Race, by having fulfilled the 11th stage, the final competitive journey, in fourth place among the T4. The 208 timed kilometers, held between Akjout and Fimlit, in Mauritania, didn’t offer great difficulties to the OLEOBAN® team that spent 1h54m37s to fulfill a path composed of fast sandy tracks and some simple crossing dunes.

The Portuguese trio, formed by Elisabete Jacinto, José Marques and Marco Cochinho, spent more 11 minutes Sergey Kuprianov, today’s winner of the T4 category, and had no trouble completing the selective sector. Elisabete Jacinto finished today’s journey with a short gap of six seconds for the Czech Tomas Tomecek, which was third among trucks.

With the result obtained at the end of this 11th stage, Elisabete Jacinto maintains the 14th position of the joint classification auto / truck. For the pilot of the OLEOBAN® team this was another day well done: “Today all went well. The special was relatively simple. The tracks were fast and the dunes were not terrifying as in previous days. We spent this journey very well and just made six more seconds than Tomecek. We are very close to achieving our goal. It’s just lacking the special of tomorrow to climb the podium of the trucks in this Africa Race. It was a tough and difficult rally, but we feel that we did our best especially in Mauritania. We are pleased with this result, “said the Portuguese.

Tomorrow’s stage is extra classification, and the Portuguese team only has to successfully accomplish the 24 timed kilometers around the Lac Rose to achieve another trophy this Africa Eco Race. Elisabete Jacinto, who is participating in this African marathon since 2010, reaches in this competition her fifth podium among trucks.

The Africa Eco Race 2016 ends tomorrow in Dakar. Although the 12th, and final stage, no longer enters the classification, is always the most awaited day by all the competitors of the race. The teams accomplish the last 24 timed kilometers along the magnificent Lac Rose and soon celebrate with joy and emotion the end of the eighth edition of this great African marathon with a ceremony that will reward the big winners of the rally. 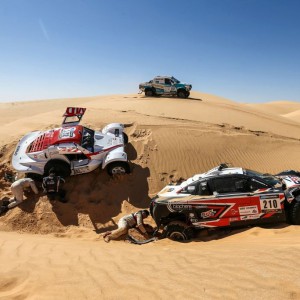 The loop Akjoujt / Akjoujt had been announced as the icing on the cake of this year’s edition. The stage of 379km kept...
Copyright 2011-2016 Rallyraid.net - RISE Network. All Right Reserved.
Back to top