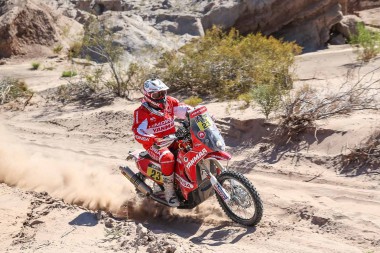 On the longest stage of the 2016 Dakar Rally, the riders had to add another thousand kilometers to their exhausted bodies, but they did it with the promising thought that this “torture” is nearing the end, and beginning to enjoy the feeling of being very close to the finish line. Of course, with a timed stage of 481 kilometers, none could afford excesses that could ruin two weeks of hard work and a year of preparation. Consequently, it was a tense stage, with some on the offensive, many on the defensive and everybody avoiding any dramatic last moment discards, which are the most painful.

Throughout the day, we saw a few fallen riders, such as Meo, untimely engine stops and even Duclos’s stolen helmet, which deprived them of any options. The HIMOINSA Racing Team riders were able to stay on two wheels, in a new showing of maturity that has led them to the gates of Rosario with all the homework done. Each with their expectations, the five riders of the “Red Army” shined once more and not only consolidating their position but also managing to climb some positions in the overall, thanks to their performances in this penultimate stage.

The most prominent among Spaniards was again Gerard Farres, very focused on the stage, in which where he started seventh, held a good pace despite the fatigue caused by the accumulating kilometers. He finished in his best form, taking seventh in the stage, which allows him to scale to eighth place overall: “It was a fast stage without navigation but bery enjoyable, and I was riding very fast, but halfway through the special I crashed and broke the road book, so I rode without it until the refueling, where I switched it to manual mode. Anyway my goal today was to overtake Bravec and I did so I am happy. Towards the end I rode for a while with Meo, who has broken his wrist and was dizzy… we are almost there.”

Ivan Cervantes, who has faced his first Dakar in a cautious way, has slowly gained experience and is enjoying the latter stages on the bike and it shows on his time. In this long special, the Tarragona local slipped into thirteenth position after maintaining a fast but steady pace: “I’m happy because I had the pace, it was a very technical, twisty stage, with rocks… it was really tough on the tires. The only thing that makes me angry is that I lost some important time due to a rookie mistake; in a speed control and we were diverted and my GPS kept telling me to limit my speed to 50 km/h. I was stuck going 50 km/h while the others were flat out, until luckily Viladoms told me. After trying to recover what was lost, I went off track in a curve, but without consequences… it’s almost done.”

In the same ascending trend and landing one of his best stages, Antonio Gimeno also climbed positions in the stage and consolidated himself among the fastest 25 men of Dakar: “Today I have reasons to be happy, I rode fast and without making big mistakes or taking excessive risks. It feels good to be in front of some factory riders in the rankings. There is very little left to achieve the dreamed goal. ”

Dani Oliveras and Rosa Romero with their outstanding consistency and without giving in to exhaustion also completed the stage without serious issues and even closer to their dream of finishing Dakar 2016. Rosario is right there, right around the corner. 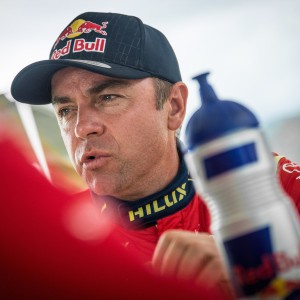