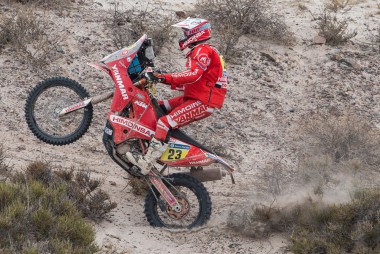 It is clear in the paddock who the “Red Army” is. The Spanish team, created by experienced Dakar rider, Miguel Puertas, with the support of the Murcian multinational HIMOINSA, with Spanish mechanics and five brave local riders, has become a true benchmark of the race. Its goal was to get all riders to the finish line in Rosario, and so far they are on the right track, even though 40% of participants already packed their bags. In addition, the team is exceeding all its expectations because It has become, its own right, the most powerful private fleet in Dakar and clearly facing the big official teams.

Only Gerard Farres is a professional raid rider and debutant Ivan Cervantes is an official KTM rider in enduro, but the others share their passion and skill on the bike with other things. Therefore, the merit of Antonio Gimeno is not smaller than that of Farrés, who figths with the best. After an outstanding Dakar, Gimenowill quickly return to his job running his motorcycle shop. It is in the spirit of Dakar where the “Red Army” has managed to dazzle this year.

And in the final stages of the world’s toughest rally, having overcome the dreaded dunes of Fiambala, survivors faced this eleventh stage, which also left war wounds. The misfortune of injured Goncalves and the 431 kilometers of obstacles left important changes to the classification. The heat striked again, forcing a new suspension in the last kilometers, which means the rankings are provisional. And as always, Gerard Farrés returned to be hard as a rock and for the eighth time he got into the “top ten” of the stage and climbed another place overall. As every day, Farrés displayed great form and intelligence, starting off slow, but slowly recovering time as the kilometers passed: “I’m exhausted, the heat was brutal and it was a long stage, dusty, with rivers and fesh fesh sand all over, you could not sit in the whole stage. I picked up a good pace and I am still in the front, but I felt worse than usual because I was struggling with energy from the beginning. It felt bad getting to the finish and then knowing the stage was shortened and there is no reward for those who crossed the finish line… we will see what happens with the rankings. ”

After overcoming the rally’s toughest navigation stages, Ivan Cervantes was back to his normal self and rode a great stage, riding in times very close to the front and finishing in a creditable 14th place in his passage through the WP9, the last valid checkpoint for all riders who had the last 30 km cut off: “I do not know if it’s because it is almost over, but I have started to enjoy this, today I had a great time starting towards the back, I overtook many riders and I rode fast, although I was uncomfortable in the dust and heat. I gave it my all, but I had a navigation problem on the river, I skipped a reference point and I had to go back, buty the worst part was having to pass several quads that overtook me and left a huge dust cloud; I was able to go through, but taking some risks.”

And as always, Antonio Gimeno continued hammering it to get back into the top thirty (28th) and stay in 23rd place overall: “I can’t believe how well things are going and I’m really proud that I’m holding on, but in days like today we had to give it all, it was so hot !!! ”

No less remarkable is the performance of Rosa Romero and his bodyguard Dani Oliveras, who after the immense suffering of the previous days and many hours of lost sleep, felt very comfortable at this stage and continued their climb in the middle of the table, and with 7,716 kilometers behind their backs 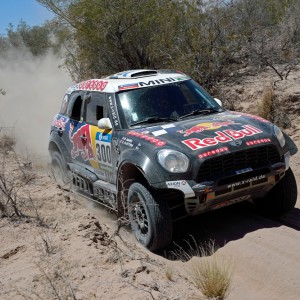