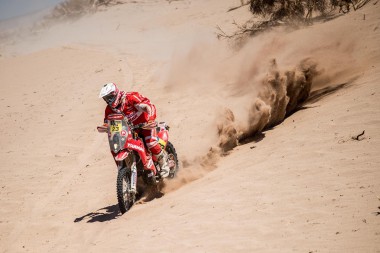 Uncertainty is also a common Dakar theme, at least in this edition. To the rider’s suffering, facing the toughest race in the world, must be added the permanent threat of climate and the uncertainty regarding routes and classifications. The organization of the rally has been forced to vary in some way almost every stage of the Dakar and that has created some discomfort among participants, who, in some cases profited from decisions, and in others were in disadvantage.

After the criticized cancellation of the last section of the ninth stage, the organizer decided to change the classification criteria overnight, counting that sector for those who had reached it and penalizing the neutralized riders. This decision put Portuguese Goncalves back in the race, after he had been virtually eliminated. Consequently, Farres, the best Spanish, started the stage from 8th place overall, although closer to his immediate competitors.

And if that were not enough, the storms came back and forced a delay in the departure by more than an hour, as well as cancelling the last 37 km of stage, due to a river overflow. In addition, this stage added a new strategic component in that the first motorcycles were mixed with the first cars, an experiment whose outcome no one could predict. Riders were exhausted after the stage and their bikes were battered from not receiving overnight assistance… C’est le Dakar.

In this unfolding of events, the HIMOINSA Racing Team riders had different luck. Gerard Farres  is not a good starter, being the first kilometers his worst at all stages. However, at this stage, things got extremely complicated because the Spaniard, who started between several cars, had serious navigation issues and surrendered 19 minutes right at the start. From there on, Farreti rode consistently at the front group’s pace and was recovering positions, but in his best moment, the race had to be shortened again, a detrimental decision for the tireless “diesel”. Farrés is still in the “top ten” as the best Spanish, but lost two positions in favor of American Brabec and a resurgent Goncalves.
Nevertheless, the HIMOINSA rider was pleased at the finish after all the complications: “It was a very difficult stage. For starters, the collective start alongside cars and trucks did not play in our favor due to the huge amount of dust. Just after the start, I saw Nasser’s rolled over MINI and at kilometer 20 I crossed Hirvonen driving in my opposite direction, and we both took a good scare. so the navigation was really difficult for everyone at the start. After that I found Meo and we could ride together, but then I discovered that I had left behind two checkpoints and knew that without them I could be penalized with two hours, so I had to turn around and find the right path. That’s where I lost the nearly 20 minutes that I started trying to gain back along the rest of the way without making more mistakes with the challenging navigation. However, I am very happy with the result considering that today we could have lost much more time in the overall”.

Ivan Cervantes also experienced one of the most difficult stages for a newcomer to the Dakar, where navigation becomes so important. In any case, he managed to cross the finish among the top 30 riders of the day. On his part, Antonio Gimeno continues to claim his role as one of the revelations of the 2016 Dakar and his consistency and great skill through the Fiambala dunes, moved him forward in the overall, giving him a shot at the “top 25 “. Gimeno was the third Spanish rider yesterday, a real merit for a non-professional driver, who works daily at a motorcycle shop and has so far been the perfect bodyguard for Farrés and Cervantes.

Dani Oliveras Rosa Romero faced the stage cautiously in order to overcome a and long and challenging journey full of obstacles and which would have its end  after completing the long liaison to La Rioja. 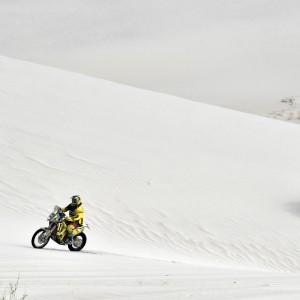 Slovak KTM rider Stefan Svitko, competing in his seventh Dakar Rally, on Wednesday mastered the second half of the second...
Copyright 2011-2016 Rallyraid.net - RISE Network. All Right Reserved.
Back to top