After an afternoon spent doing the papers for the visa, which to simplify the Mauritanian border crossing were installed in the first bivouac and after a chilled temperature night, the competitors of this 2016 AFRICA ECO RACE started with the real stuff this morning with the first real Mauritanian sandy stage. A leg with no major incidences, managed to increase some gaps in between the main challengers of this year’s race.

First stage win for Andrew NEWLAND in the bikes 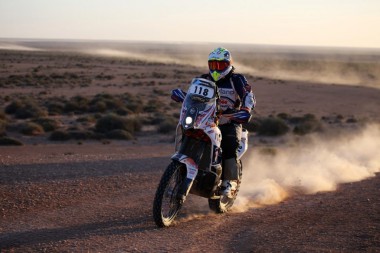 Andrew NEWLAND is a friendly contractor in the British building scene working in London. He is also a very talented motorbike rider, as he often does Enduro races, but he does not really know the world of off road rallying, before coming here this year he had no idea who Pal Anders ULLEVALSETER is. He started this 8th AFRICA ECO RACE with no pressure and it is one of his first rallies. He started the race with a lot of speed and good navigation, but the Brit had some troubles during the last Moroccan stage and lost 3hours in the ranking. This morning in 3rd position, Andrew NEWLAND managed to benefit from a massive navigation error from Pal Anders ULLEVALSETER in order to get his first rally success.

The Brit leads Norbert DUBOIS, who finishes second of the stage. Behind we find once again Anastasiya NIFONTOVA, still very strong, but it must be said was help a lot by the French driver Stéphane HAMARD when her bike was stuck in sand all the way to her engine. The Russian driver secures a little bit more her 2nd place in the overall ranking, but she is followed very closely by her compatriot Dmitry AGOSHKOV only 13 minutes behind, but also the Frenchman Norbert DUBOIS who has made a spectacular come back into 4th just in front of Stéphane HAMARD. Andrew NEWLAND’s win today enable him to come back into 6th place in the overall ranking.

Kanat SHAGIROV is breaking away 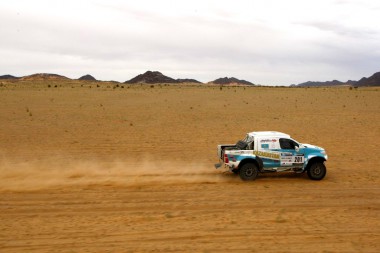 It is very complicated in a normal off road rally, harder in the AFRICA ECO RACE, and even harder in Mauritania, to start first of a stage and having to open the course. Having said this, is extremely rare that the opening car wins the stage. This is what the leader of the overall ranking Kanat SHAGIROV managed to accomplish today behind the wheel of his TOYOTA Overdrive.

He accomplished this in style 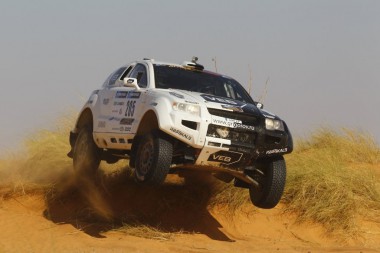 by beating the 2nd car driven by Jérémie CHOISEAU with his OPTIMUS by 17’36’’. The 3rd position of the day is held by the Russian Anton GRIGOROV with his OSCAR, always very strong in Mauritania, followed by the OPTIMUS’ of Philippe GOSSELIN and surprisingly Guillaume GOMEZ who finally enters the top 5.

The two TAREKs of Yves FROMONT and Patrick MARTIN finish in a comfy 6th and 7th position, just in front of the two OPTIMUS’ of Jean Pierre STRUGO and Pascal THOMASSE.

The two drivers from Team MD Rallye Sport managed the best overall gain of the day, as there two main rivals Jean Antoine SABATIER and Mathieu SERRADORI, where victims of belt problems, the power steering for the first and the water pump for the second. At the end of the day SERRADORI lost 34’23’’ who was flying through the rest of the stage, and over half an hour lost for SABATIER who also loses 2 positions in the overall ranking. It is important to point out that all 8 OPRIMUS’ racing crossed the finish line in the top 20, with a gap to the leader of only 1h05’15’’ for the “worst” driver of the fleet.

Even though they arrived a bit later at the bivouac, the T2 drivers managed a very good day, especially Alexander TERENTYEV, leading with his amazing FORD Raptor, the Russian wins again, in front of the Kazakh TOYOTA of Mara ABYKAYEV and the French TOYOTA of AIVAZIN who is finally on the podium after a disastrous week in Morocco. This a small victory for him and his co-driver Claude FOURNIER and all the team from 2000 Aventures who worked like crazy to get the car back up and running again.

Small revenge from Anton SHIBALOV in the Trucks 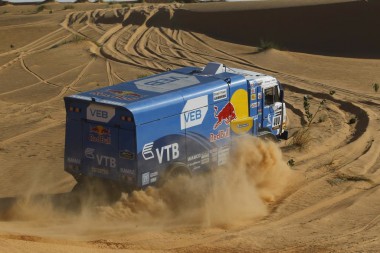 Beaten yesterday by his team mate Sergey KUPRIANOV with the Hybrid KAMAZ, Anton SHIBALOV wins today’s stage will a tiny 34’’ gap in front of his Russian team mate. A tiny gap in between the two blue trucks, which proves that after 414 km of racing, there are no team orders in application for the moment, unlike in previous years.

Once again, the Czech Tomas TOMECEK finishes in 3rd position with his TATRA just 10 minutes down from the KAMAZ and with a 3 minute lead on the Hungarian SCANIA of Miklos KOVACS. The Portuguese driver, Elisabete JACINTO inaugurated her MAN’s sand ladders when she changed tracks when trying to overtake KOVACS. This missed overtake meant that she lost 40 minutes getting back going again, but she is still comfortably in 3rd position in the overall ranking.

Wednesday January 6th, the competitors will do a 377km loop around Atar. A day filled with sand and navigation but still many beautiful landscapes. 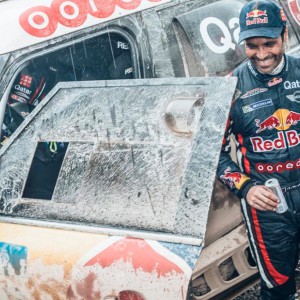 This year’s Dakar Rally kept up its record of delivering the unexpected every single day: in fact, not one of the stages...
Copyright 2011-2016 Rallyraid.net - RISE Network. All Right Reserved.
Back to top