The philosophy of the AFRICA ECO RACE is to create loops so that the assistance can get some time to catch their breaths. That was not at all the case for the competitors, who on the other hand had to deal with a very typical Mauritanian stage, with lots of rocks, soft sand and all this before René METGE’s navigation exercise, so all in all a very complicated stage. For the top competitors all went well, but further down the field some competitors will arrive at the bivouac of Amodjar in the late hours of the night.

Pal Anders ULLEVALSETER is back in the victory seat 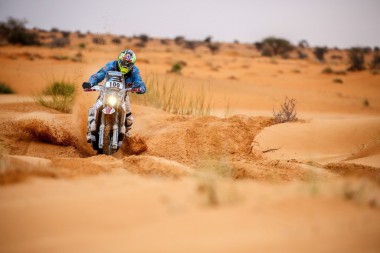 With just one look at Pal Anders ULLEVALSETER’s face at the end of the stage, we can see how this stage was hard, if not very hard. The Norwegian, is with any doubt the most titled rider still riding today, admitted at the end of the stage that this 8th stage of the AFRICA ECO RACE that this stage was one of the most challenging stages of his whole career and he has completed many stages in his career. Today’s 377 km loop took him 6h29’10’’ to complete with his KTM 450, having said all this he was very happy to sign his 6th win in this 2016 edition.

Behind we have Andrew NEWLAND, let’s remind you that this is his first big African off road rally, he described this stage as a punishment. As soon as he rehydrated himself by drinking a POWERADE, the Brit was very happy to discover that he was second fastest of the day with a gap of just under 30 minutes.

Great performance from the Portuguese MOREIRA DE SOUSA family, the father and son are riding together on this AFRICA ECO RACE right from the first day and they finish today 3rd and 4th of the stage, also only 30 minutes from the lead. They finished just in front of Norbert DUBOIS, 5th of the stage after having lost some time due to navigation issues very close to the finish. The Frenchman has managed to come back into 2nd position in the overall ranking, mostly because of a very bad day from Anatasyia NIFONTOVA and Dmitry AGOSHKOV.

Behind the gaps are much bigger as we can see with Jan ZATKO, the veteran from Slovakia, who finishes 10th and over 2 hours behind the leader. At 8pm local time, 9pm Paris time, we still had 8 riders out on the tracks. Unfortunately, the Belgium rider Jean Louis BLANPAIN will not be joining us at the bivouac this evening, he was the victim of a nasty fall and fractured his femur right at the begin of the stage, is currently been flown back to Europe to under an operation. 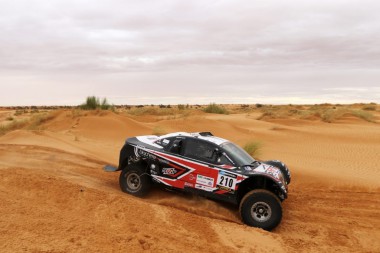 It has been two days now that Mathieu SERRADORI has put in place a perfect strategy to overtake his main rival in the overall ranking by starting low down in the field and pushing hard to gain precious time. Yesterday this plot did not succeed because of a mechanical failure, so he started today’s stage in Chinguetti very motivated, one of the iconic villages of the rally. Behind the wheel of his SRT Buggy, the Frenchman drove an incredible stage, by the time he got to CP4, just 80 km from the end of the stage, he had generated a 40 minutes lead on the rest of the field. But a massive navigation error at the km 361, caused him to lose 38 minutes and all hope for a comeback on the leader of the overall ranking. SERRADORI still managed win the stage, the second this year, with a 3’11’’ lead on Pascal THOMASSE whoes OPTIMUS encountered engin cuts throughout the whole day.

The 3rd position is for the Kazakh Kanat SHAGIROV, once again very strong today while driving his TOYOTA and he loses only 9’14’’ in the overall ranking and manages to stay in the lead of the event. Special mention for the good performance delivered by another OPTIMUS, this one driven by David GERARD, 4th in the car ranking, just in front of Jean Antoine SABATIER and Dominique HOUSIEAUX. The big losers of the day are the Russian Anton GRIGOROV in 18th and Jean Pierre STRUGO who finishes in 19th. This first miss performance from the Frenchman costs him 2 places in the overall ranking. On the other hand the VIDAL family composed of Luc and Marlène succeed to complete the stage in 21st and leave behind them the Mauritanian hell for which there strong 4×4 TOYOTA is ideal.

In the T2 category, the only two drivers who completed the whole loop of Atar are the Russian Murat ABIKAYEV with his TOYOTA and Joseph ROSSO with his NISSAN who finished 7 minutes behind. All the other competitors were forced to cut short their loop, and we shall see very soon the impact this has on the overall ranking, once all the penalties have been applied.

TOMECEK was very close to glory 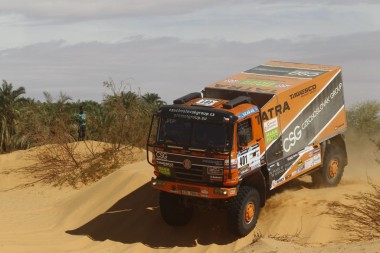 Tomas TOMECEK, three time winner of the AFRICA ECO RACE, was excited to begin the Mauritanian stages with his TATRA, which is very light and sable in the sand, in order to finaly fight with the KAMAZ. If is was not for a puncture which makes him lose 20 minutes, the Czech would have beaten Anton SHIBALOV, because his final time is only 11 minutes behind the Russian truck. A very good stage for Elisabete JACINTO with her MAN who only loses 13 minutes to the KAMAZ, this enables her to increase her confort zone of 3rd in the overall ranking.

Thursday January 7th 2016, the Monaco Dakar caravan will head to Akjoujt where the bivouac has stopped for the past 3 years. If on the one hand the assistances will only have a 200 km liaison, the race bikes, cars and trucks still in competition, will have a 444 km stage to complete which once again looks very interesting. 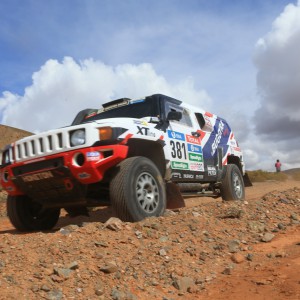 The 2016 edition of Dakar Rally continued at a higher level in all senses: the 429 km special was the longest so far and it had to be completed...
Copyright 2011-2016 Rallyraid.net - RISE Network. All Right Reserved.
Back to top