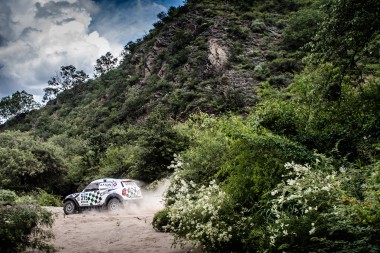 Mikko Hirvonen has made it: in the 12th and penultimate stage of his first Dakar Rally, the Finn celebrated his first win – the third for the MINI ALL4 Racing. At the end of the 480 kilometres, he crossed the finish line with a nine-second lead over his team-mates Nasser Al-Attiyah (QAT) / Mathieu Baumel (FRA) who finished second. Nani Roma and Alex Haro (both ESP) came home fifth in the stage from San Juan to Villa Carlos Paz.

The AXION X-raid Team cheered and applauded when stage winner Hirvonen turned in into the service park. “I’m absolutely delighted but also surprised,” admitted the Finn. “I hadn’t the impression that we were that fast, today. Keeping your rhythm proved to be difficult. Whenever you thought that you could go a little faster the next tight corner proved you wrong. But apparently it was difficult for everybody. I don’t think that I will be able to pass Giniel by my own effort but everything can happen.” Giniel de Villiers’ lead over Hirvonen now adds up to 4.5 minutes.

Al-Attiyah once again could gain several minutes on Peterhansel but still holds the second place overall. “We again have been driving for many hours. Being the first to start into the stage was anything but easy as the terrain was extremely loose,” said the driver from Qatar. “We didn’t take too many risks but we wanted to gain time on Stéphane to keep our chances alive. And I’d like to congratulate Mikko on his stage win. A pity that he couldn’t pass Giniel in the overall standings.” 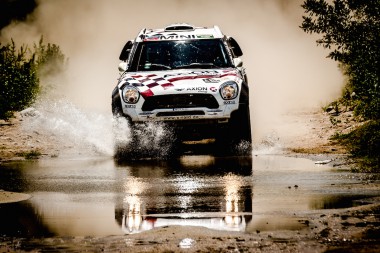 Roma also had set himself the goal to pass a driver – Leeroy Poulter – in the overall standings. But on the tight track he just couldn’t gain enough time. “This wasn’t what I’d call a goof day,” he admitted. “For 140 kilometres I had to eat the dust of Yazeed but I failed to close in on him to a distance making it possible that he had heard the Sentinel,” revealed the Catalan. “But when I had passed him I finally could push – only to get back in the dust. I identified the Peugeots of Loeb and Stéphane and made one effort to pass them – but got off the road. Afterwards, we opted for playing it safe and just drove home to the finish.” Tomorrow, he would have to be 10 minutes faster than the South African to gain a position in the overall rankings.

Just like his team-mate, Terranova also lost a lot of time in the dust. “Actually, it wasn’t a really bad day but then we closed in on Robby Gordon. We started eight minutes behind him and when we had closed the gap he proved to be like a wall. This situation cost us too much time.”

Poland’s Kuba Przygonski and his co-driver Andrei Rudnitski (BLR) finished 12th. “I was rather busy in the car,” said the car-category rookie who also drove in the dust of Gordon. “On the winding track you had to turn in, press the pedal to the metal, brake and go flat out again. There was so much dust that we weren’t able to always close in sufficiently. But altogether I’m happy with what we achieved today.”

Tomorrow, the final stage, featuring a 180-kilometre special stage, will take the field back to Rosario where the competitors will cross the finish podium in the afternoon. But these 180 kilometres once again will be quite a challenge: tight, winding, rocky, sandy… This special stage has got it all. And so, anything can happen. 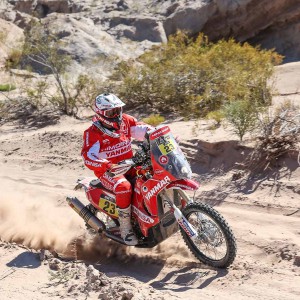 On the longest stage of the 2016 Dakar Rally, the riders had to add another thousand kilometers to their exhausted bodies,...
Copyright 2011-2016 Rallyraid.net - RISE Network. All Right Reserved.
Back to top