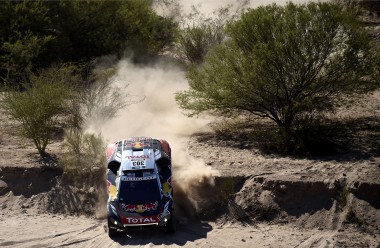 After a shortened but action-packed stage today, the PEUGEOT 2008 DKR still occupies first and second places in the overall classification. Carlos Sainz now leads in front of Stéphane Peterhansel. Because of extreme heat that took its toll on the motorbike crews in particular, peaking at 47 degrees centigrade, today’s stage – which took place mainly on sand – was stopped at CP2 after 179 kilometres of the expected 285.

All the competitors encountered a series of problems. Carlos Sainz and Lucas Cruz had to deal with three slow punctures as well as getting stuck twice. By waypoint 3 they had dropped more than four minutes, but the Spanish crew still ended up winning the stage and leading the rally for the first time. Stéphane Peterhansel and Jean-Paul Cottret started the day leading the rally but had two punctures and got stuck twice, which cost more than 11 minutes in total. The number 302 crew is now second overall. Although they lost time helping their team mate Stéphane Peterhansel, Cyril Despres and David Castera put in a great performance to record sixth-fastest time.

It was another chaotic day for Sébastien Loeb and Daniel Elena. Having got stuck in the sand four times, the Franco-Monegasque crew had to change a shaft 30 kilometres from the finish. They lost 1h13m.

Carlos Sainz (PEUGEOT 2008 DKR n°303), stage winner
“It was a very difficult stage. There was a lot of off-road action on soft ground, with a lot of vegetation. We had to stop twice because we got stuck in the sand. I’m not sure exactly why they shortened the stage, even though it was certainly challenging due to the heat. We had three slow punctures but we didn’t have to stop to change the tyres. I’m pleased to be in the lead but it will be very difficult to open the road tomorrow on the Fiambala stage.”

Cyril Despres (PEUGEOT 2008 DKR n°321), 6th on the stage
The stage went well for us. We stayed concentrated and didn’t get stuck. It was a very difficult stage physically but we kept on the pace. We saw a car stopped on the stage, and it was Stéphane. When you’re part of Team Peugeot Total, you owe it to everyone to help the team lose as little time as possible. We gave him a spare wheel. Without this delay, I think we could have hoped for the stage victory today.”

Stéphane Peterhansel (PEUGEOT 2008 DKR n°302), 7th on the stage
“We had lots of problems today. There was plenty of vegetation, including some thorny bits, and we had two punctures. We got stuck twice: not in the actual dunes but in some soft ground. I slowed down a bit before coming into a hole and remained blocked there. At the end of the stage, with plenty of vegetation jamming the radiators, I had to slow down so that the engine didn’t overheat. We lost a lot of time today. Tomorrow the Fiambala stage will be crucial for the rest of the rally.”

Bruno Famin, Peugeot Sport director
“We knew full well that these first few days of the second week would be extremely complicated. And our fears have been realised. Nonetheless, we remain with two cars at the front, even though Stéphane lost plenty of time. Nasser is just 14 minutes behind and our objective remains the same: to bring all four cars to the finish at Rosario. Our drivers are all here to serve the team and they are fully aware of that. But for now, given the very small advantage we have over Nasser Al-Attiyah, it would be suicidal to impose team orders.” 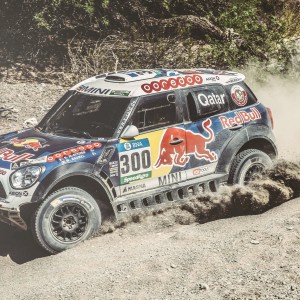 Qatari driver Nasser Al-Attiyah predicted that the desert stages in the Fiambala region would prove decisive in the outcome...
Copyright 2011-2016 Rallyraid.net - RISE Network. All Right Reserved.
Back to top