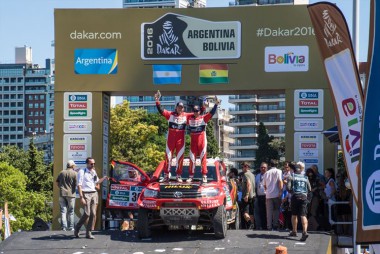 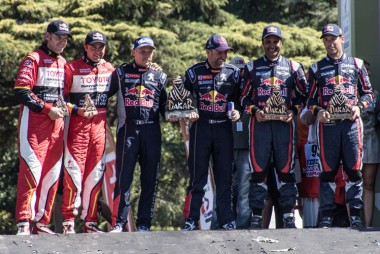 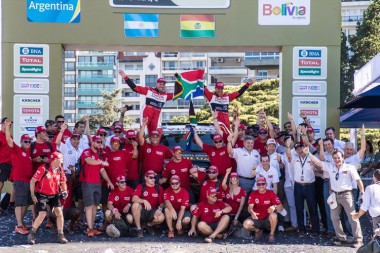 The thirteenth and final stage of Dakar 2016 may only have been 180 km long, but what it lacked in distance, it made up for in suspense. For Toyota Gazoo Racing SA, Stage 13 was the final challenge separating Dakar veterans Giniel de Villiers and Navigator Dirk von Zitzewitz (#301) from a place on this year’s podium. They had multiple WRC winner Miko Hirvonen (MINI) pushing hard to knock them down to fourth place, but the pair prevailed and sealed third, by posting a time just 03:08 behind stage-winner Sebastien Loeb (Peugeot).

“We knew Miko would be fast on the final stage,” said an elated De Villiers from the finish podium in Rosario. “The stage included some sections that would have been very familiar to him, having competed in WRC rounds in Argentina. So we pushed, but to a safe limit, and also kept it tidy. In the end we did enough to stay ahead of the Finn.”

As it turned out, Miko did go fast, stealing an early march on De Villiers/Von Zitzewitz. But after initially opening a gap of two minutes, the South African driver managed to protect his third place, slightly closing the gap to Hirvonen by the end of the stage.

This was the second consecutive podium finish for De Villiers/Von Zitzewitz, who finished in second place last year. Since switching to the Toyota Hilux, the pair have finished second (2012), third (2013), fourth (2014), second again (2015) – and now third.

“This is clear testimony of the ability of the Toyota Hilux to perform at the very highest levels of competition,” said an ecstatic Team Principal, Glyn Hall, at the end of the 9,597 km-long race.

“Not only that, but it also underlines the fact that we have an extremely consistent crew in Giniel and Dirk, and this year’s result is another excellent achievement.”

Leeroy Poulter and navigator Rob Howie (#319) in the second Toyota Gazoo Racing SA Hilux, finished 5th on Stage 13, keeping a hard-charging Nani Roma (MINI) behind them. They maintained their fifth place in the overall standings ? Poulter’s best result yet, having finished 33rd in his first Dakar (2014) and 16th in the 2015 edition of the race.

“We are very happy with this year’s race. The only disappointment was losing out on the stage win in Stage 12, but other than that we have every reason to be pleased,” beamed Poulter after driving his Toyota Hilux over the finish podium on the banks of the Paraña River in Rosario on Saturday, January 16th.

The pair lead for more than five hours during the grueling Stage 12 of the race, narrowly losing out on their first stage victory as a result of a tightening corner that was obscured by the dust of a slower competitor.

For Yazeed al Rajhi and navigator Timo Gottschalk in the third Toyota Gazoo Racing SA Toyota Hilux, Dakar 2016 held more challenges than they had anticipated. The pair caused quite a stir with their raw pace during the 2015 edition of the race, running in third place until Stage 11, when they were forced to retire. This year, they again proved to be a force to be reckoned with, but lost a significant amount of time on Stage 10 after losing a wheel on their Toyota Hilux which dropped them out of contention as a result.

“Even so, Yazeed continued to post very good stage times early in the race – going third-fastest on Stage 6. In the end they opted for a more conservative approach over the last two stages, ensuring a solid 11th place in the overall standings,” said Hall of the Saudi’s race.

Dakar 2016 kicked off with a Prologue on January 2nd, and covered nearly 10,000 km over the two weeks that followed.

During that period, the revamped Peugeot team initially seemed unbeatable, but when the race came to a finish on January 16th, the top three consisted of only one Peugeot (Stephane Peterhansel), with MINI driver Nasser Al-Attiyah taking second place. The top trio was completed by De Villiers/Von Zitzewitz in their Toyota Hilux.

“To me, the fact that all three our factory Toyota Hilux race vehicles completed the race, is fantastic,” concluded Hall. “But to have two of them in the Top 10, and Yazeed in 11th, is a great achievement. We have every reason to be proud of our car, and the lads that drove them to such stunning finishing positions.” 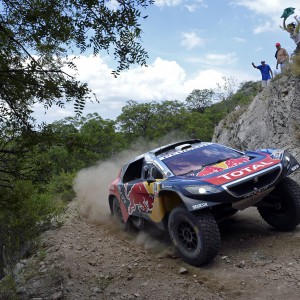 In order to help their team mates in case of any possible problems, Sébastien Loeb/Daniel Elena as well as Cyril Despres/David...
Copyright 2011-2016 Rallyraid.net - RISE Network. All Right Reserved.
Back to top